Argentina – Br. Zatti, immigrant. A response of hope in the face of adversity
Featured 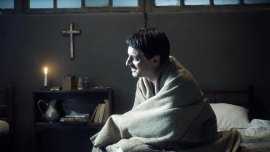 (ANS - Buenos Aires) - Twelve thousand kilometers separate the town of Boretto, in the Province of Reggio-Emilia, Italy, from the city of Bahia Blanca, in the southern part of the Province of Buenos Aires, Argentina. Like millions of families at the time, the "Zatti" emigrated to America in search of better living conditions. A new landscape, a new culture, and a new language welcomed a young Artemide, a saint who lived some of the dreams and hardships, the longings and joys, experienced by every migrant who leaves their homeland.

Millions in search of a better future

In the second half of the 19th century, the Italian social system and agrarian structure underwent a serious crisis that affected small farmers and sharecroppers. The shift from the countryside to the city caused by industrialization, together with the concentration of rural property and the growth of poverty, pushed Italian farmers to emigrate to America.

Of the 52 million Europeans who emigrated between 1830 and 1930, about 11 million landed in Latin America: most came from northern Italy and Spain. Almost half of them, about 5 million Italians, settled in Argentina.

Boretto, a small farming town on the Po River, was also affected by the agrarian crisis. And the Zatti family suffered from economic difficulties. From an early age all family members, including the children, went to work in the fields. The older children and other family members worked as laborers or farmhands to earn bread and porridge: "Born into a poor home, where there were many mouths and little income, it was necessary to work if one wanted to live," summed up Salesian Fr. Raúl Entraigas, Zatti's main biographer.

Like the rest of his family, Artemide led the poor life of hard-working and self-sacrificing peasants. And like other Italians, he saw America as a way out. Information from relatives who were already on this continent was enthusiastic. In particular, his uncle Giovanni Zatti, who had settled in Bahía Blanca, was acting as a "callback."

Migratory chains, networks of acquaintances, and ethnic and religious identity made it possible to channel news, discover job opportunities, and take advantage of the few resources available. Friends and relatives already residing in the "promised land" initiated these chains. Thus, in early 1897, the Zatti family set sail for Argentina. Artemide was 16 years old.

Bonds and faith to feel at home

Once they arrived in America, the Italian immigrants, the vast majority of whom were agricultural workers, engaged in a variety of activities that allowed them to earn a living or, at best, achieve a slight social uplift. The Zatti arrived in Argentina on February 7 and settled in Bahía Blanca, then a small town in the south of the province of Buenos Aires.

The support of family members and the solidarity of social networks, such as mutual aid societies and Church action, facilitated the migrants' inclusion in a social, cultural, and productive life. Don Bosco's Salesians, many of whom were also Italians, facilitated this inclusion in local society.

As part of this migratory chain, Artémides serves as an advisor to newcomers to the country: "I heard that cousin Iginio arrived from Italy, or rather, from the unforgettable Boretto. From the distant lands of Patagonia, I wish him good luck (...) Advise him not to let himself be trapped (applies to everyone) by that master who makes people work even on holidays, under the pretext of necessity, saying and putting into practice what he will have already heard, that in America everything is allowed as long as one earns money."

The Zatti's, a religious family, accustomed to the practices of peasant piety, were frequent visitors to the parish of Boretto. Once in Argentina, Artemide, like all his brethren, joined parish life and soon became an assiduous participant in activities organized by the Salesians. From his contact with the Salesians, his religious vocation and desire to become a Salesian was born.

With the memory of the homeland

Migrants, even those who joined "welcoming" societies such as the Zatti in the late 19th century, experienced poverty and uncertainty. While trying to maintain ties with their place of origin, they built new ties locally to make their way. Through an intermediary, Artemide got in touch with his parish priest in Boretto and sent greetings to all his fellow villagers: "I have written to Boretto, to Father Costante Solian, asking for certificates of Baptism and Confirmation. He has already sent them to me, taking care to send greetings to all of you and to the 'Borettans' who live in Bahía Blanca."

In Artemide’s life we can see his resilience in the face of adversity in his new life context: precarious work, incomplete studies, severe health difficulties, uncertainty about the future. Yet, in the face of all this, he was able to recover. Finally, in 1914, he obtained a "citizenship card" as a citizen of the Argentine Republic. Only in 1934, on the occasion of Don Bosco's canonization, did he return to Italy and visit his native town.

Several factors influence migration, which can be voluntary or forced, a consequence of ecological disasters, economic crises, or situations of extreme poverty or armed conflicts, the magnitude, and frequency of which are constantly increasing.

Although at a lower rate than in the late 19th century, countries such as Argentina continue to receive hundreds of thousands of migrants each year, especially from other parts of Latin America. And as in other parts of the world, Salesian works are points of encounter and faith for migrant families and a place of education and recreation for their children and youth.

At the same time, and as a consequence of various factors, many people leave Argentina to settle in other places. They leave, like the Zatti family, in search of new opportunities, chasing dreams, with difficulties and fears.

Yesterday as today, migrants - despite shortcomings, injustices, and inequalities - use their particular knowledge, networks, and skills to make their way and build a better future for themselves. In doing so, they contribute to forging stronger, more diverse communities with resilient individuals in the new societies and cultures in which they arrive.

The "Zatti," and among them Artemide, have made the history of Argentina. That migrant from Boretto found his vocation with the Salesians and developed a full life. Later history saw him in Viedma firmly committed to a vocation of unconditional service. A life path consecrated to God and to the poorest, for which he is remembered as the "relative of all the poor," and a simple saint close to the people. An immigrant saint, hope for difficult times.