Angola - "When you give ... you love." A photo essay on Salesian missionary volunteer work.
Featured 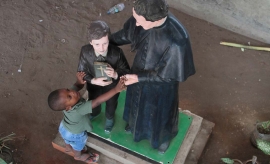 (ANS - Luanda) - "Voluntary service is the act of donating one’s time and personal knowledge to promote the community or society in which one lives, through actions that are not paid, but have an important value in themselves, for the community and for one’s neighbour. If we do all this for love of God ... then we have said it all." So writes the Provincial of the Salesians in Angola, Fr Victor Luis Sequeira at the launch of the photographic book "Cuando amas das ..." (When you give, you love ...). The book is by a volunteer photojournalist, Evangelina Martínez, from the Argentine.

"When we talk about volunteering” says Bishop Esteban María Laxague, SDB, Bishop of Viedma, Argentina, “we refer to so many people that come out into the open for others and put their lives, their skills and knowledge at the service of others. Sharing life with others and journeying with them is what defines this reality that so many live (...) Seeing 'volunteers' gives renewed hope in the other, the hope that the human being is a gift for the' other".

Health, education, faith, work, play ... there are many areas in which a volunteer may work. And all these have been faithfully captured by the photographer and are now being replicated in her photo book.

The author comments: "realizing the dream of going as a missionary to Angola was the most beautiful thing I've ever experienced in my life. (...) It taught me to appreciate life, to live the present, not to anticipate by thinking about tomorrow, but to live today, now; not to give my time to material things; and to understand that happiness is complete only when it is shared. (...) Being a volunteer is a way of life that marks the soul forever. Blessed Mother Teresa of Calcutta used to say: 'We cannot do great things, but we can do small things with great love.'"

Evangelina Martinez is a 38 year-old photographer from Carmen de Patagones, Argentina. Between 2015 and 2016 she spent six months as a volunteer missionary in Angola. Helped by the NGO "Misión Puente" which is coordinated by the Argentine Salesian priest Fr Marcelo Ciavatti, she provided humanitarian service in the Salesian houses in Luanda, the capital of Angola and in her book she has immortalized the situations she faced.

The Argentine province of Rio Negro issued an official decree which declared her voluntary mission an act of social, educational and cultural interest.