RMG – GSFS2017: Many Families in the Salesian Family
Featured 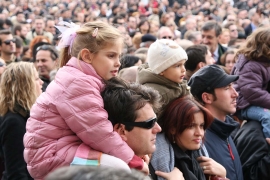 (ANS – Rome) – The fundamental link between Youth Ministry and Family Ministry was put again at the centre of Salesian reflection by the Rector Major, Fr. Ángel Fernández Artime, with the Strenna 2017. But it is quite some time that diverse realities of the Salesian Family realise paths and proposals to accompany the families in today’s challenges. Some of these initiatives are being presented now at the Days of Spirituality of the Salesian Family 2017.

There is the School of Formation for Family Animators (SFAF), born in Rome in 2005, within the association “Cerchi d’Onda” (Wave Circles). It aims at inspiring and guiding couple and family life with the experience of Salesian spirituality, and at enabling people to operate in initiatives of family animation. In these years, over 600 families, about 1500 people, benefited from SFAF, which proved to be not only a workshop of family pastoral initiatives, but also a space for the birth of vocations.

In Giarre, close to Catania, there is the Family Association “Metacometa”. It was created and animated by the Castaldo couple, and is located by the Centre of Salesian Spirituality “Casa Tabor”, which is a place of formation and prayer for the entire association. “Metacometa”, with the guardian families gathered around it, from 1988 to date has offered the warmth of a family to about 500 minors entrusted to them by the Juvenile Courts and by Social Services, and in the latest years it also dealt with the reception of Foreign Unaccompanied Minors who arrived by sea on the coast of Sicily.

The Association Mary Help of Christians (ADMA) has since long developed specific courses for families, always based on the two pillars indicated by Don Bosco: the Eucharist and Mary. Around the first ADMA of Turin, the Association gathered numerous young families who meet once a month and who in the summer hold a one-week long retreat, all together, children and adults. They all feel at ease with the motto: “Entrust, Trust, Smile”.

A similar experience is the “Hogares Don Bosco”, an ecclesial movement of Family Ministry, born in Spain in 1965, thanks to the work of Salesian Cooperators (SSCC). Today the movement is spread in 8 countries, numbers over 100 groups of couples in Spain alone, and is made up of spouses who freely adhere to a path of Christian and Salesian growth.

Finally, in its initial phase but already with good perspectives, there is the experience of the Family Counselling promoted by Mr and Mrs Bagin, both SSCC, in Bratislava, Slovakia. Kamil e Katerina Bagin, as they worked for the youth, realized how greatly their family problems affected their lives. Because of this they offer to young couples testimonies, courses of preparation and opportunities of voluntary work, counselling and dialogue.