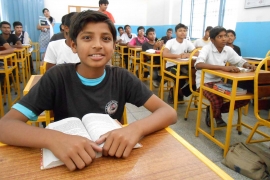 (ANS - Mexico City) - "The other day, as I left the subway, a man approached me. He had a common look and feel, but there was also something very special about him. He had been my student several decades ago, at the Don Bosco Institute, the first real job in my life, the one that decided my vocation. It is since then that I can call myself a teacher. I am a simple Catholic, a layman, an ordinary citizen and yes, also a teacher.". Here is a unique testimony on the Preventive System by Jorge Eugenio Trasloheros, a teacher who has experienced it throughout his life.

At the time the school was run by a Salesian named Carlos Armando Morales, to whom I owe my first and most important formation with young people. In addition to being a very good priest, he was a great trainer of teachers. His method was simple: maintain a close friendship, always ready for dialogue. So every day, almost without realizing it, between talk and jokes, through his example I learned little lessons - presence, friendship and support, in balance with the performance of my duties.

Don Bosco had developed an educational method called 'preventive'. Its active ingredient is the constant presence of the educator among students. His logic is to prevent problems and so keeping pace with, communicating, advising and guiding are a substantial part of it. It is a method that appeals to reason and the heart, and the recognition of the dignity of every person in the dynamics of the Gospel. It differs radically from sentimentalist permissiveness; from a soft, feel-good friendliness that undermines the authority of the educator; from a competitive individualism that is efficiency-oriented; and also from disciplinary techniques based on punishment. Just a few rules - presence and appropriate accompaniment.

I have tried to apply the preventive system in different situations. In religious or secular institutions, between believers of different religions, agnostics or atheists, and I have never been disappointed.

In places where I worked before or after I have had some responsibility as director. And in every situation, I tried to apply the Preventive System. Because it is based on presence, reason and respect, it is very respectful of the identity of each person.

The only problem with this method is that it can be tiring when the vocation falters, which is not unusual in this area. Sometimes we lack prudence, impatience plays ugly tricks on us and discouragement threatens to suffocate us in routine. In my case, I usually fight these times through prayer.