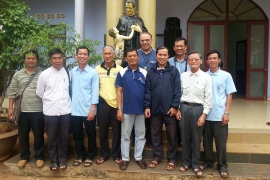 (ANS – Ho Chi Minh City) – From north to south of Vietnam the Salesians are working for the poorest youth, educating and evangelizing. There are challenges but there is also satisfaction.

The first Salesian work in Vietnam was a humble Orphanage in Hanoi (1952-1954). Due to a variety of historical, social and political reasons it was only 40 years later in 1994 that the Salesians were able to slowly return to help in rebuilding the local Church. Two of the first Salesians who served the major seminary eventually became diocesan bishops (Bui Chu - 2001, Bishop Joseph Tiem and Thai Binh - 2009, Bishop Peter De). At present, there are twenty-one Salesians (3 Brothers and 18 Priests) serving the youth and the local Church in 10 different locations in the North of Vietnam. Already in September 2016 there was the first canonical community at Cat Dam in Thai Binh diocese. It serves as the point of reference for all Salesians in the North.

In many of the parishes that were entrusted to the Salesians over the next 25 or 50 years there was no priest. To plant the Salesian Charism in this context is not easy. However, slowly Don Bosco is being known and our typical educative and pastoral services to the young have been started in seven different dioceses around Hanoi. The charism of Don Bosco is rooted in some places through Oratories (playground - soccer field and typical music and after school activities), ministry to the rural college students in the city, looking to open a first orphanage, Youth ministry service in the dioceses (youth leader and catechist formation). There is also the Salesian family with two FMA communities, a small group of Salesian Cooperators and the VDB are growing.

As Fr Angel F. Artime, the 10th successor of Don Bosco, said two months ago in Thai Bin: “The slow, humble but decisive move of the Salesians towards the North of their country is an important vision for our future. We need to get out of the comfort zone in the South. We are called to bring the love of the Good Shepherd to many places that are still waiting for the initial witnessing and proclamation of the Gospel”.

Vietnam has a population of 95 million with 54 different ethnic minorities. In the diocese of Kontum – Pleikou, in the middle of the country, the Gia Rai people are the majority of the Catholics in the rural areas. In 2005 the Salesians of Don Bosco started to work with this ethnic minority. Their language is part of the Austral - Polynesian group (like some languages in Indonesia, Fiji, Samoa and other Pacific Islands). Gia Rai people are about 400.000 and their traditional way of life (close to nature, matriarchal family clan system) is now challenged by contemporary culture.

Five rural parishes with more than 22 mission stations with a mixture of Vietnamese and Gia Rai Catholics are entrusted to the Salesians: 7 priests, 1 Salesian Brother and 1 Cleric are living in 6 different locations while forming one canonical community.

It's a true domestic mission: for effective ministry to the young and the local people there is a need not only to celebrate the Mass in Gia Rai language, but to be able to communicate in daily life. The humble sharing of the Salesian Charism in this specific highland environment is expressed through the Oratory and small hostels for the Gia Rai youth, patient faith education and catechist formation in our parishes and mission stations.

In Dong Thuan, in the Southern part of Vietnam, 12 Salesians and 3 FMA Sisters of Dong Thuan Vocational Training Centre (Opened in 2004, Rector Fr. Thomas Vu Kim Long) are working with 145 boys and girls - most of them are boarders. Coming from many provinces of Vietnam, and usually labelled as 'hopeless' kids, these students are growing up again with Don Bosco. Young people from broken or dysfunctional families, ethnic minority youth, school drop outs and youngsters with a variety of addictions find here their home and launching pad!

Among the main education challenges is usually a low self-esteem, lack of family care and different addictions. And the close presence of assisting Salesians brings to life the wonderful creativity of Don Bosco’s Preventive System. For example, four Salesian practical trainees launched a very successful 'Stop-smoking-Club' with the participation of 45 boys. After a one-month awareness campaign now all of them are happy and proud to stop smoking. One little victory after another - stop swearing, volunteer service experience and other hurdles are on the journey.

Don Bosco is not yet much known in this most Southern part of Vietnam, so the Salesians try to reach out to the local people and youth with many different programmes. There is a clean drinking water supply, a housing programme for poor people in the neighbourhood and a newly opened daily Oratory with sports, music, tournaments and language class.