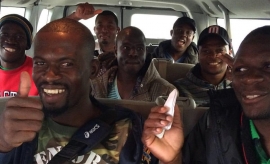 (ANS – Tijuana) – Between May 2016 and January 2017, a Haitian tsunami hit Tijuana. These migrants arrived dizzy, exhausted, cold, hungry, and broke after their threemonth land journey from Brazil. Some were sick. Some had delivered babies or miscarried en route. Some had buried their dead along the way or watched helplessly as loved ones were swept away by swollen rivers. Some left their dead to rot in the woods. Some were stripsearched, robbed, raped, or exploited as they traveled through Central America.

At the peak of the migration in December, there were 480 Haitians – men, women, and children – living at our shelter, the Desayunador Salesiano. It is designed for 80 guests. They slept on the floor or they slept outside. With President Trump’s January 20 inauguration, the Haitian tsunami stopped as abruptly as it had begun. The deportation rate had soared to over 70% of those who attended their scheduled U.S. immigration hearing.

With very little in Haiti to go back to and the oppressive stigma borne by those have been deported, the Haitians who remain in Tijuana have opted to apply for Mexican residency. Many of them have found jobs, settling for $10 a day for 10 hours’ work. Others have faced brutal – but “honest” – racism when seeking work, being told, “We don’t hire black people here.” Those who can, have rented one-room apartments in the only neighborhood they can afford, the Zona Norte, right along the U.S.-Mexican border. This is drug cartel territory and a human trafficking hell hole.

Seventy Haitians are still living with us. They and the other 5,000 Haitians who came to the Desayunador found a warm Salesian welcome. In fact, the number of Haitians who came to us was so high because through social media the word quickly got around that the Salesian shelter was the kindest of them all.

We dressed and fed them as we could. We arranged their medical care. We listened to their stories, consoled and encouraged them, helped them navigate the Mexican immigration bureaucracy, translated for them, celebrated mass in Creole, French, and Spanish, and offered moments of relaxation and  celebration.

Now we are helping them with online residency papers and obtaining Haitian passports. Their expressions of gratitude are sincere and heartwarming. Three young Haitian men have joined the staff of the Desayunador Salesiano and are exemplary in their joy, family spirit, and zeal for work.

As for our ministry to Mexican deportees: it’s booming; another consequence of U.S. immigration policy. Men show up at our shelter with deportation papers in hand, dazed, like deer caught in headlights. I always ask them how the deportation took place. They are relieved to be able to tell someone. Angel was in L.A. for 14 years, working and raising his family. He was asleep with his wife at midnight when the police knocked at his apartment door. He had enough time to put on his boxers, pants, and a shirt. And he was gone.

Sergio was seeing his kids off to school before going to his job of 18 years, when the police arrested him outside his house, handcuffed him, and drove him away, leaving his wife, kids, and neighbors in shock. José was on a customer’s roof applying new shingles when he was called down and asked to show his papers. Gone. No time to gather any documents, money, say goodbye, or pack luggage.

They arrive in Tijuana with no one and nothing. They don’t know the city. They have no local contacts, no job, and no place to live. The Desayunador helps bridge them into their new life lest they fall into a life on the streets. Through all of this, one of the most important Salesian qualities we offered our migrant friends was kindness. Kindness makes a difference. It offers hope. It restores dignity. It reminds people who have been treated harshly that they are indeed important. Kindness has many expressions: listening patiently, providing accurate information, sharing a laugh or a hug, praying together, encouraging, making sure everyone gets a blanket, offering a pair of shoes that fit, helping to get a medical prescription filled, etc. Kindness alone didn’t solve every problem, but it did make them all easier to handle.