Sierra Leone - "I came away convinced that many of them know that they will die in the most inhumane prison in the world, despite their young age"
Featured 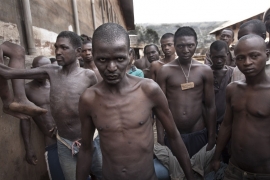 (ANS - Freetown) - Alberto López is a Spanish journalist at the Department of Communication of the Salesian Missions Office in Madrid. A few days ago he visited one of the most inhumane prisons in the world in order to prepare for a documentary on the work of the Salesians with the most disadvantaged young people of Sierra Leone.

Who could have imagined that a Sierra Leone prison did not have security cameras, that in the control area inside the courtyard, between the barracks and the prisoners, the guards after lunch would sleep with their uniform open, that tens of prisoners went naked around the courtyard, washing in buckets of water, and prisoners sentenced to death were dressed in black with a large "C" sewn on the uniform ... I did not dream it: I was back again for more than two hours in the jail called "hell on earth".

My first visit was made possible by a Salesian who introduced me as a great benefactor from Europe who gave a lot of money to the prison. The pretext was credible because Don Bosco Fambul is the only organization that enters the prison freely. They have a small building where they deal with a group of prisoners, many of whom are young and ill, but all are weak and malnourished.

That visit allowed me to see how simple walls and a fence in the centre of the city could turn back by decades the situation and the rights of prisoners. I saw scary situations, which remain unchanged.

The only photographer who was allowed to enter years ago was Fernando Moleres. He documented the situation with images that cause pain and despair. Since then, it is forbidden to enter with cameras or telephones.

On this occasion, on my second visit, my role was that of assistant to the doctor, a Salesian missionary who tries to bring some little bit of heaven into the hell of that prison. He is Fr Jorge Crisafulli. With a huge bag, packed with all kinds of medicines, tests, and medical instruments, we went into the jail, to see everything and undergo another unspeakable experience in which suffering is mixed with resignation and apathy on the part of the detainees and also with gratitude for every gesture of attention.

I came away convinced that many of them know that they will die in the most inhumane prison in the world, despite their young age.