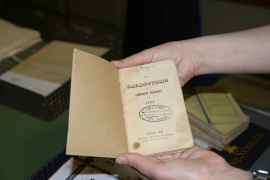 (ANS - Rome) - When did Don Bosco begin to talk and write about the wish to honor the Most Holy Virgin Mary, by invoking her with the title of Help of Christians? It is a question that comes back every time that this big feast is celebrated around the world.

Started in March 1853 the "Catholic Readings" series, Don Bosco also published in 1854 the "Gentleman", an almanac intended for subscribers and readers. It was only in the booklet for the year 1860 that the "Gentleman" noticed for the first time on May 24: "Blessed Virgin Help of Christians".

In the 1861 booklet next to May 24, Don Bosco wished to be written: "The Most Holy Virgin with the well-deserved title of Help of Christians, Auxilium Christianorum", thus preventing all the popular almanacs from pointing out, without ever ceasing, the day fixed by the Church for such anniversary. (...)

In fact, Our Lady began to be present in his dreams with the title of Help of Christians. On the evening of May 30, 1862, Don Bosco told to his young people about the dream of the two columns in the midst of the sea, that is shown today in a picture that is in the Shrine of Mary Help of Christians. Above one of the columns, he told that he had seen the statue of the Immaculate Virgin Mary, at whose foot there was a big signboard with these words: Auxilium Christianorum.

A few months later, one evening in December 1862, to the cleric Paolo Albera, who was then his second Successor, Don Bosco addressed these exact words: "our St. Francis of Sales Church is too small and can no longer contain all the young people. We will therefore build another one that will be more beautiful, bigger, that could be magnificent, and we will give it the title of the Church of Mary Help of Christians”.

Don Bosco expressed his design even to Fr Giovanni Cagliero, who became then Cardinal. (...) “Our times are so sad that we really need that the Virgin helps us to preserve and defend the Christian faith. And do you know another why? "