Italy – Don Bosco: “A War Machine With Some Mishaps”
Featured 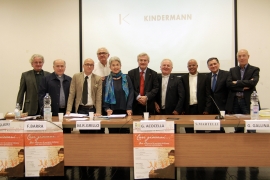 (ANS – Salerno) – “A war machine with some mishaps”: this is the boldest metaphor with which Don Bosco was pleasantly defined during the presentation in Salerno of the critical edition of his letters: a monumental book presented by a large groups of professors of the Universities of Salerno, Cassino and Naples.

The Don Bosco that emerges from his correspondence with thousands of people of all walks of life, obviously read thoroughly and attentively, is a person of an exceptional depth under various aspects: historical-political (Francesco Barra), historical-cultural (Sebastiano Martelli), historical-sociological (Giovanni Gallina), historical-pioneering (Nicola Bottiglieri).

In fact Don Bosco seized all the opportunities offered by the political, social, cultural, economic and ecclesial situation of his time to realize, with the very limited resources he had, an incredible “project of life”: saving the souls (and bodies) of tens of thousands of young people at risk and preserving the faith in large groups of the population. In today’s terminology we could say that as an authentic self-made entrepreneur, he sensed and followed a start up logic that enabled him to make his own “profit” and develop the know how and the communication media (of his time) through which he could make his enterprise grow. His was obviously a “holy” enterprise that, however, like all enterprises, encountered some “mishaps” (weak points, mistakes, illusions, failures, and even judiciary controversies).

“A collection of letters made up of facts, not of words”: this is the way in which the work was defined, despite the fact that paradoxically the over 4.000 pages of the seven volumes already printed and of the three remaining ones are full of words; they are never empty words; rather, they are words full of vital energy, of creative action, of formative potential, of organization of an “innovative” apostolic work.

Fr. Francesco Motto, SDB, who edited the volumes, remarked: The letters, with their daily sequence, are not only, without his knowing, an autobiography of the Saint, but they are also the central thread of the entire complex, multi-coloured and problematic action of Don Bosco.

It is obvious that with the printing of about 5.000 letters, a third of which are absolutely unknown, a whole lot of publications that are extremely reductive of a person like Don Bosco, become obsolete. The true identity of Don Bosco lies in the entirety of his being and of his action and not in the exceptionality, originality or uniqueness of one dimension, even if it were the pedagogical or thaumaturgical one.