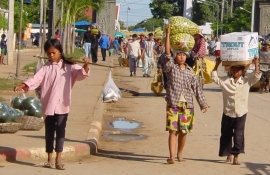 (ANS - Rome) - Yesterday, June 12, was the International Day Against Child Labor. Promoted by the International Labor Organization (ILO), its aim is to raise awareness of this issue and fight this plague present across the globe, and especially in the poorest countries. In 2017, as per ILO guidelines, the day was devoted to "children in conflict countries."

Experts agree that laws against child labor do not work in countries with few resources. And when these countries are in conflict, the number of working children increases; why, in 2017, the ILO appeals to: "protect children from child labor".

The ILO's objective is to raise awareness about the breadth of this problem and to join efforts to eradicate this phenomenon. According to UNICEF, there are "over 168 million boys and girls who work around the world." Most of these children carry out tasks that are dangerous to their health and many, even in the 21st century, have the worst jobs possible: they are slaves without any rights; above all, without the right to be children.

Millions of children around the world are forced to work in domestic work as slaves: they cook, get water or fire wood, undergo physical abuse, receive little food and little rest in return. In many cases, they are victims of trafficking in human beings, or even of organ trafficking.

The Salesians are seeking them out in local markets or near the factories where millions of children work and even spend the night; they also address their employers or families directly to make them understand that children must have time to go to school, play and rest.

Across the globe, the Children of Don Bosco are finding minors in landfills, plantations, mines, on the street as street vendors, in ports, at work as car valets, parking attendants, or in textile factories, doing brickwork ... And they have proffered help with hundreds of works to: "protect children from child labor."