France - Salesians of Don Bosco: what to do for migrant minors?
Featured 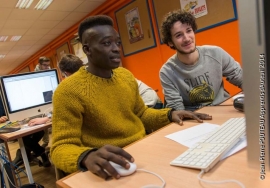 (ANS - Gradignan) - The Don Bosco Salesian social assistance work in Europe and around the globe welcomes many migrant minors and carry out invaluable integration work to facilitate these young people finding their place in their host country.

On their way, some young migrants have met with the support of the Salesians; it is the case of Amine, from Ghana, today hosted in Germany. In Spain, he was received by the Don Bosco Foundation, accompanied by two religious and various educators, including several Salesian Cooperators. Amine recalls: "My morale was restored. I cannot forget what some Christians have done for me, a Muslim. Being together was a joy to me. I have heard that we have the same God and the same strength in our convictions of fraternity. This really put me back on my feet, after all the sufferings I had experienced during the trip."

All over the world, there are numerous Salesian works with migrants and refugees. In France, the Center for Rehabilitation and Vocational Training (CRFP) of the Don Bosco Institute of Gradignan is one of the institutes of the Don Bosco Network for Social Action that welcomes minor migrants. Sylvie Dufeu, Director of CRFP, hosts 30 migrants in its center with a total of 90 boys. "We house, with joy, young Afghan, Pakistani, Malaysian, Ivorian and Guinean young people. They're all males. And they manage to live together well because we are doing specific educational work to relieve tension. They have many common activities so that they can be together. In our center they quickly integrate into professional training. They devote themselves fully.

On the other hand, we also have to deal with disappointment when some schools refuse them entry because they do not have the required level of study."

Always in France, Catholic organizations network together to sound the voice of those who have no voice. Faced with the dangers that accompany these young people - abandonment, delinquency, prostitution ... - Secours Catholique has established a collective called "Together Against Trafficking in Human Beings" (Ensemble contre la traite des êtres humains), which carries out activities of legal protection, raising awareness to change attitudes towards such young people, and bringing proposals to the public authorities.