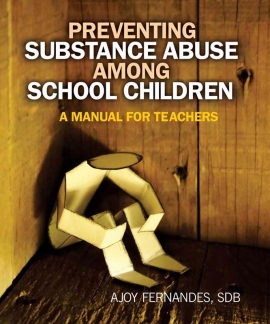 (ANS – Mumbai) – The World Health Organisation has estimated that 250 million children the world-over are affected by tobacco consumption. It's figures such as these, and others published in India, pointing to over 90 percent children in certain Indian states using tobacco and well over 50 percent opting for alcohol, cannabis and other inhalants, that has prompted the Don Bosco Research Centre (DBRC), under the leadership of Father Ajoy Fernandes to undertake a three-year-long study on substance abuse among school children, the findings of which have been published in a book penned by Father Fernandes, entitled “Preventing Substance Abuse Among School Children” a manual for teachers, being launched by Cardinal Oswald Gracias on June 29 in Mumbai.

The programmes and research on the issue reached its culmination with the publication of the book, which is aimed at helping school administrators, teachers understand issues related to substance abuse among school children and to prevent such occurrences.

The book breaks down the complex terminology associated with drug abuse, right from defining drug and substance abuse, to highlighting the progression of the habit, the risk, factors that contribute to abuse and eventually the dangerous chemistry associated with drug and substance abuse that essentially re-programmes the brain of a healthy child to ‘negatively impact cognitive functions’. Despite alarming numbers, unfortunately educational institutions have not yet identified drug or substance abuse as a problem that could have life-changing consequences on a child.

“In some places administrations are not even attentive to the issue,” Father Fernandes said. “Some administrations are attentive to the issue and want to do something about it in a couple of cities, for example, when we were trying to get in touch with schools; they were not even willing to accept the idea because they felt if we do a training programme like this it will seem that there are drug addicts in the school and it will bring a bad name to the school... Probably this has not really hit the administration, perhaps they have not found severe enough instances for them to awaken to the reality of sensitisation and that is an issue.”

The book highlights several “vulnerability factors” that could push a child into experimenting with substances. These factors could be on an individual level, with attention and learning disabilities, low self-esteem; at family level, with conflict-ridden families; school level, caused by academic failure; or even community level, which stems from the easy availability of substances.

“Vulnerability factors are at an individual level; they are on the family level; they are on the school level, and they are on a society level. So, this is what I would like to highlight most in the chapters, rather than just focus on the mere fact of drugs and substances. What I want to focus on is the vulnerability factors, and when I say prevention this is what I think needs to be done. So, what I have been noticing is if families are not stable, if there are conflicts within the family, husband and wife fighting with each other, if there is violence in the family, either physical abuse, sexual abuse, within the immediate or more extended family, if there are instances of mental health issues in family, then the children begin to feel unable to handle the insecurity of the basic family, that is when the likelihood of this happening is there,” Father Fernandes said.

“Even perfectionism is a strong thing. What people would want to achieve is sometimes the source of the problem. They want to achieve academic success. But when they start hard-driving children, and children are not able to meet up to parental expectations, that’s when it happens, or when parents are extremely over-critical about the performance of children, where they push them to achieve, that’s when they actually fall. So, for me that would be a vulnerability. It just struck me that somebody from a well-placed family, financially well-off family, spoke about a son on this, what struck me when I spoke was an active conflict between the parents.”

“Individual factors are largely the whole issue of lack of ability to cope with academics. If children have learning disabilities, like attention deficit whatever, they are likely to be the ones who cannot cope up with this, so if schools don’t understand this, and give support for this issue, and if schools are not aware of what learning disabilities are, then these children will be pushed as being lazy, not interested, so they will get negatively branded. Then, when they get discouraged - together with not being able to handle this - they are more likely to try substances.”

“A very large percentage of those who later become school dropouts, anti-social elements, and land on the streets or have attempted substances, are those who have had learning disabilities. So, if this issue of learning disabilities is not attended to, then these children will tend to become dropouts, or when they are not able to cope, and there is also lack of understanding at home, parental pushing, these children will become vulnerable. So, those vulnerability factors there are strong.”

“It may seem that it is only learning issues, but also children who are withdrawn, shy, who are not able to cope up with regular companionship, through loneliness, isolation, that will be another issue at an individual level. On the school front, it may be the kind of company they keep. It has been found that students who are more likely to indulge in bullying, in violation of school norms, in thefts or whatever else, these are children who tend to be more vulnerable.”

Given that the transition from childhood to adolescence is turbulent and fraught with possibility of risky behaviour in response to peer pressure, academic stress and parental expectations, Father Fernandes emphasizes that parents and teachers should work together to identify and tackle the issue of substance abuse in children as early indicators become apparent.

“Parents, as well as teachers, have their normal responsibilities, so they will tend to focus primarily on academics, earning. Largely because much of their attention is attending to their regular duties, these might tend not to get noticed. Parents and teachers might not be aware of the indicators. Since they are not aware, the likelihood of slippage taking place until the time it becomes so obvious, then it’s too late. So the idea is to be attentive to indicators from the start,” Father added.

“We have a set of what are school-related indicators, especially if we find they are not coping up with school work or there is absenteeism that will be one way. Then we look at personal appearance. If there is a sharp change in communication, either where they were not boisterous, suddenly boisterous, very withdrawn where they were early communicative, those may be indicators.”

Several interventions have also been highlighted that would help steer a healthy, happy child away from substance abuse. “Developing good communication skills, trusting relationships with adults, where they can speak. Developing social skills also for insertion into company where they get support and skills where they can resist pressures,” Father Fernandes concludes.

Though statistics point to an increasing trend in school-going children turning to substance abuse, it’s clear that publications like “Preventing Substance Abuse Among School Children” and research undertaken by DBRC will help offer educationists and parents alike pertinent insights and tips to “identify, accompany and assist those experimenting with substances and providing guidelines to safeguard others.”