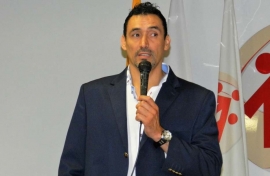 (ANS - Medellín) - Pablo Andrés Velez Velez is an entrepreneur who runs a chemical products firm and is responsible for a group of twelve workers and a happy family. He was invited to the Salesian "Ciudad Don Bosco" to talk to young people. His words and, above all, his life, have become a real example of self-improvement.

After being "picked up" by a woman who took him home in the city's poor neighborhood into a family, Pablo Andrés left his "new home" to live on the street where he spent four years of inhumane life.

After years of experience in the streets, he learns of the "Patio del Gamín", a "Ciudad Don Bosco" program for street children.

One of the stories of the boys called "Gamines": "At traffic lights, these boys pick up or on car drivers who are alone, especially women, threatening them with a rudimentary knife, a broken bottle, whatever, asking for rings, watches, wallets. It is one of the many ways to steal." And thanks to the work of the first Salesian, the adventure of being a friend of the gamines - street children and teens - began.

Pablo Andrés enters the "Ciudad Don Bosco" program and begins a difficult journey with the need and having made the decision to change his lifestyle. He wanted to break with the rejection he had experienced since his birth having been abandoned by his mother.

"Because one is not guilty of being born poor, but yes, of dying poor," with this statement by Steve Jobs, Pablo Andrés addressed the young people of "Ciudad Don Bosco" at the vocational training courses for work and human development, the aim of the talks being to show them "that we can all move on and achieve our dreams, that with study, persistence and a strong decision to overcome adversity, one can achieve the life that one wants."

Thus, Pablo Andrés, among motivational and decisive phrases, showed the children "how he rebelled against poverty," and began his climb to success.

Never let "the difficulties placate the impetus of a young person full of illusions and dreams for a better life."