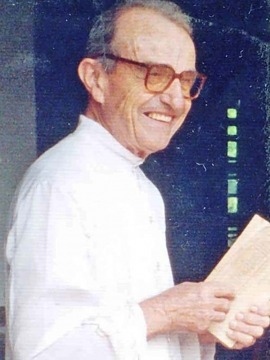 (ANS – Yangon) – “It was specifically the delicate consideration of my Rector Fr. Fortunato Giacomin in my regards that convinced me to join the Salesian Congregation” said once Cardinal Charles Maung Bo, SDB, Archbishop of Yangon, Myanmar, during an interview with the Italian Salesian Bullettin. But who was this special Salesian missionary, called the “Don Bosco of Myanmar?”. The newly appointed Provincial of Australia-Pacific Province (AUL), Fr Will Matthews, born and bred in Myanmar, is also a former student of Fr. Giacomin in Anisakan, in his prenovitiate year (1993), and now draws an interesting portrait:

Fr Giacomin was a well-known Salesian priest to my family, particularly my parents and grand-parents. I was lucky enough to be able to spend a few months in Anisakan with Fr Giacomin during my pre-novitiate.

I used to pray the breviary with him every evening. I still remember him reading the biographical memoirs of St John Bosco as spiritual reading about fifteen minutes each evening. My English language wasn't very good. But it was great listening to the he used to read slowly and clearly for me in his Italian-English ascent.

I witnessed him as a humble man who lived out his Salesian life as the best of his ability. He was a great role model for all Salesians in Burma. He helped them and guided them in their vocation. He was strict, yet always with a smile. Fr Giacomin was prepared to tell you if you not doing the right thing.

Spoke Burmese language quite well, and ready to share a joke with anyone he met along the way. He used to get up early to celebrate Mass and spend some time in prayer and meditation. He proved himself as a hard worker, not wasting time at all at any stage.

Fr Giacomin was a very gentle and caring person. He showed God's love to all he met in his life. He always greeted people with respect.

In my time with him, he served as a pharmacist to the students, Salesians, and the poor locals in Anisakan. There were always a large number of people lining in front of his little clinic every evening during the week to get some free treatment or medication. A lot of his patients still remember him fondly.

He never look for self-promotion or credit for his work. Always happy to do the given job to the best of his ability. Finally, Fr Giacomin dedicated his entire life as a Salesian for the people of Burma.

I sincerely believe that he is with God, because there is no other place for him.