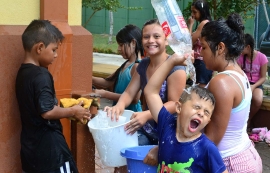 (ANS – Rome) – In many countries in the northern hemisphere, young people are in vacation in July and August. This creates also a great opportunity for missionary volunteering. The Congregation has a very rich and varied experience in this area. Many young people spend a few weeks, even a month, in various forms of apostolate, animation, volunteering or summer    experiences in different parts of the world.

From Slovakia some young people go to Ukraine, Azerbaijan, Siberia; from the Czech Republic to Bulgaria; from Slovenia to Angola; from Malta and Austria to India; from Italy to Egypt, from Spain to Morocco, from the United States to Mexico.  It is internally, within their own countries, above all, where the most varied activities take place, such as summer camps: In Italy there are the "summer boys", in Australia, "Cagliero camps", in Brazil "Boscolandia". Some other initiatives are more missionary, such as the "mission weeks" or the GAM (Missionary Action Groups) in San Paulo; the JMS (Salesian Missionary Youth) in Uruguay; the GRUMS (Missionary Groups) in Colombia; in the Democratic Republic of Congo the active members of "Missionary Groups" go to rural areas on holidays; in Angola more than a hundred university students go “to experience mission" in the forgotten areas of the country.

We could go on indefinitely over the entire Congregation: India, Vietnam, Nigeria, Ghana, Madagascar, Australia, Argentina, Ecuador, Mexico, Venezuela ... all with similar experiences. And what do they do? The types of activity vary depending on the context. There are the typical activities of daily oratories, remedial learning, activities of cultural formation of young people; Bible-study groups, human rights education, health education, emotional and sexual education, pastoral animation of groups; workshops of handicrafts, theatre, dance, music, sports, tournaments. They may make family visits, where they pray together, reading a passage from the Bible and blessing the home.

The good that comes to the missions is great, but what is even greater is what takes place in the hearts of the young “missionaries”, giving rise to an explosion of happiness, which will positively influence their lives for ever. I once received an SMS from a girl who was returning from one of these missionary vacations. She was from a wealthy family, one of a group of 30 university students in Angola. They had been to a difficult place, hot, very poor, infested with mosquitoes, malaria, no toilets, sleeping on mats on the ground, ... Her message read: "Thank you very much, Father, for making me discover where true happiness is." Happy holidays in the missions!