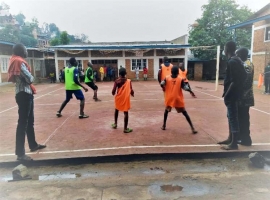 (ANS - Bukavu) – The presence of the Salesian community “Don Bosco Bukavu” has reached the end of its second year of activities in Bukavu. Salesian Fr Piero Gavioli has sent ANS an evaluation of the two years of missionary activity. "We thank the Lord who guided us and allowed us to fulfill our mission at the service of vulnerable young people despite the country's critical situation."

2016-17 at Tuwe Wafundi Vocational School
Despite the country's general situation, the scholastic year was generally quiet. The quality of teaching has been improved. We opened new sections for repair work and welding, and for girls, an experimental  course in fashion hair-styling in the Nyota Center. 54 apprentices obtained their licenses or certificates, 8 were rejected, but can resume their courses.

Among the 116 apprentices who had started the trade school in November 2016, many retired. Although the school is completely free and meals are given, vulnerable children find reason to abandon their studies at their earliest difficulties.

Evaluation of 2015-16
A project supported by Belgium has allowed us to open a Job Recruitment Office. The coordinator of this Office conducted a survey to see how many of our apprentices who received vocational training at the Don Bosco Center found work. Of the 42 apprentices awarded their certificates in 2016, almost all the bricklayers and carpenters have found employment. The mechanics, instead, have had more difficulty. In addition, the coordinator contacted the owners of workshops, companies, building sites to ask them whether they could accommodate the 2016-17 finalists for a three-month internship. Last June 17, he invited 29 entrepreneurs to an information and exchange meeting at the Don Bosco Center, after which it was decided to create a platform for collaboration between the Center and the employers.

Reception of children in conflict with the law
On August 15, 2016, we signed a Memorandum of Understanding with the Provincial Division of Justice of South Kivu, and on 3 November 2016 a protocol of cooperation with the Tribunal for the Minors of Bukavu. We have committed to accommodating 10 minors in conflict with the law, and 30 children in our trade school, and to ensuring an animation presence in the Special Section for Minors, annexed to the Bukavu Central Prison. Each Sunday, Domingo and a number of aspirants participate in the Mass celebrated for minors. They talk to them and occasionally animate recreational activities. We want to strengthen this presence: it allows us to get to know the children in conflict with the law, and to propose our trade school for when they leave the Special Section.

Ten boys from the street or in conflict with the law are now at the Don Bosco Center, entirely in our charge.

Distance support for school expenses
The Don Bosco Center supports families who cannot pay their children's public school fees. Depending on the degree of vulnerability, the Center has intervened to pay half or all the school fees for about 150 primary and secondary school children.

Oratory courtyard
The school's courtyard is small, but enough for children to play in peace. This year, a project funded by Germany allowed us to turn the school yard into a near-regular volleyball court. Having a cemented courtyard is a rare treasure in Bukavu. Sometimes we use it for volleyball games, but also for any other sporting or cultural activities.

The Salesian Family
In Bukavu, 16 people have made their promise as members of the Salesian Cooperative Association after almost two years of formation. Another twenty aspirants continue their formation. A dozen former pupils from other Salesian schools meet once a month at our home and collaborate with our activities. A small group of young people is laying the foundations of the Salesian Youth Movement.

Aspirants
During this year we have continued to receive dozens of requests from young people who want to become Salesians. We accompany them for two years, a time necessary and sufficient to discern whether they have the qualities to answer to their vocation. This year, five Bukavu boys were admitted to the novitiate, and 8 to the pre-novitiate.