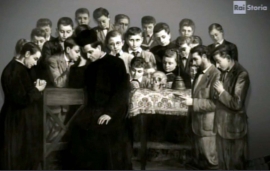 (ANS - Rome) - A documentary on the life of St John Bosco aired on the Rai Storia channel in August. Produced with material from Teche Rai (Radiotelevisione Italiana), it was based on biographical notes suggested by guests Fr Ángel Fernández Artime, Marco Pizzo and Domenico Agasso.

Historical photographs, documents and movie clips from the Salesian Photo Archive, the Salesian Central Archives and the Don Bosco Missions Photo Archives were also used as were Rai Vatican recordings of Pope Francis' Salesian memories recorded on 21 June, 2015, during the Pontiff's pilgrimage to Turin. The Pontiff describes the importance of Don Bosco as an influence, and recalled the common origin of their respective families from the same hills of the Asti area.

"Today, Don Bosco is no doubt the universal Italian Piedmontese for the Church and for the world," said Fr Ángel Fernández Artime, Rector Major of the Salesian Congregation. "Don Bosco was first of all a tenacious Italian, an Italian who really thought about Italy, leaving politics aside, but thinking of Italians," said Domenico Agasso of La Stampa, a Turin-based national newspaper. And Paolo Mieli added: "Don Giovanni Bosco was one of the most beloved religious, but in the nineteenth century it was not easy for a priest to be loved by the Italians. At that time, the Risorgimento was made in contrast to the Catholic Church. This is the season iGiovanni Bosco found himself operating and proselytizing with a spirit of loyalty to his Pope Pius IX, without however acting as a reactionary priest."

The documentary reconstructs the successes and failures of Don Bosco's life, his clashes and meetings with the famous, his charisma, his method, his spirituality, his continuous journeys and his mysterious supernatural talents.

"His was a revolutionary social religion, courageous, that completely changed what was the set culture and society surrounding him at the time," concluded Marco Pizzo, Vice Director of the Museum of the Risorgimento of Rome.

The documentary can be seen at: