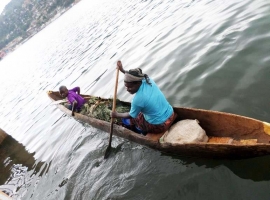 (ANS - Miti) - There are three maternal orphans abandoned by their fathers; there is Bora, a young woman who has faced more challenges in her 28 years than most people live through in an entire lifetime; there are the Bambuti Pygmies who, while being the region's oldest inhabitants, when Kahuzi Biega National Park was declared a World Heritage Site by UNESCO, were expelled and now live on the margins: there are, alas, many poor people living in rural areas near Bukavu where the Salesian missionary Fr Piero Gavioli and Lydie Masoka, a Salesian Cooperator, are working as best as they can to help give a future to the area's children and most vulnerable teens.

To help the Bambuti children and, in general, the vulnerable children of Miti, a village about 20 kilometers from Bukavu – orphans, children abandoned by their parents, children whose families are reduced to misery, without a penny to pay school fees, clothes and health care for their children – Lydie, with some friends, founded the association "Mwana Bwato", which in the local language means: "the child and the canoe."

Lydie tells us: "If we take care of the child as if they were a canoe, the child will develop its qualities, be able to sail through the lake of life, carry out activities useful to themselves and to others."

The first thing Lydie did was to identify the elementary and middle school children who would not have been able to finish the school year due to the poverty of their families, unable as they were to pay school fees. With distance support from the Don Bosco Center, she was able to help the parents of 25 children pay their debts towards the school.

"The children do not have clean clothes. They do not have all the notebooks, and it often happens that a student faints in class from hunger; nonetheless, they do everything possible to finish the school year and be promoted," concludes Fr Gavioli, admiring their commitment, a sign that is surely encouraging for the future of these little ones.