Syria – “Faith gets stronger when faced with difficulties.” Testimony of Rania
Featured 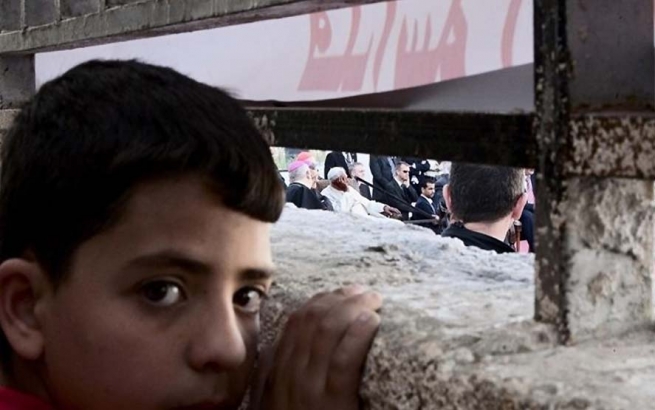 (ANS – Aleppo) – Despite difficulties and the possibility of emigrating, Rania Salouji, a 40-year-old Christian in Aleppo and her family. Neither the violence of war and fear for an increasingly uncertain future, nor the two-month and half captivity of her husband by an extremist group specialised in abductions for ransom, or what she calls her "most difficult time", the death of a child at a catechism school killed by a rocket, were able to get them to leave.

Rania is married to Grigor and they have two children: Michael, 17, and Hovik, 14. They have stayed in their city to overcome fear and contribute to the reconstruction of a future of peace and hope in Syria’s largest northern city, once the country’s business capital, as to that of Syria, its history and its people.

When war broke out in March 2011, they were afraid "even to set foot outside". But over time, in the face of a conflict that has caused more than 450,000 deaths and millions of displaced people, the family decided "to live normally, as much as possible."

"I used to recite the rosary as I took the children to school to give us courage," Rania told AsiaNews. “However, I was always anxious for the fate of my children." When she left them with the teachers, she prayed to the Virgin Mary to "entrust them to her: They are your children," she would say, "take care of them."

Rania and Grigor, and their children could have left, but "we decided against it. We felt we had a mission here, in our city and in our country." For this reason, "we stayed in Aleppo, entrusting ourselves totally to God. Of course, it is not hard to believe, to trust the Lord when all is well, but faith gets stronger when faced with difficulties."

She is responsible for a group of catechists at the Salesian Centre in Aleppo, which has recently resumed its activities after a long interruption due to the war.

"When we reopened, I felt a strong emotion, mixed with fear,” she said. “There was concern for the health and safety of children, especially when they came to the centre by car or when they went home after the activities." The Salesian Centre has up to 900 children.

"It was nice seeing them play together. Their life is full of stress, difficulties and in their homes, they certainly have no chance of playing freely," Rania explained.

After years as a main battleground, the city was liberated last December. Faced with the city’s tragedy, and its residents, including the children, battered by war and violence, the Church in Aleppo has launched a number of projects in the past few months, many of which successfully continue today.

They include cleaning the city and helping young couples, providing food parcels and money for electrical supplies, not to mention summer camps for hundreds of children, financial help for healthcare expenses and medicines, visits, exams, and treatment. All these steps are for the needy and those many people in Aleppo who cannot afford them.

People could face the tragedy of war thanks to the power enclosed "in prayer, especially in the Rosary,” Rania said. “Even when my husband lost his job or when Aleppo lost its water supply and food was scarce, we never lost what really matters: faith in Divine Providence."

The worst time came with the death of a kid who was attending catechism class, who was killed when a rocket landed a short distance from a group of young people who had just finished their lesson. "Sometimes when I look at the ground in front of the centre, I still see the kid playing without a care in the world.”

Another difficult time came when her husband was held captive for two and a half months by a gang of extremists. "He went out to buy something but never came back,” she said. To find out what happened, she tried every channel, going to Damascus even.

"I do not know what it means to sit and wait. When my husband was abducted, I felt I had to move, act, work, do something. I did not want to show my children fear and anxiety about his fate. I felt I had to be strong for them.”

Patience and trust in the Lord's grace enabled her to hug again her husband, safe and sound, albeit tried by the experience.