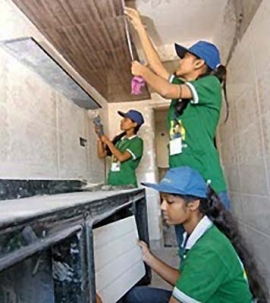 (ANS - Calcutta) - Kanchan Kumari Sao is one of the many Indian girls saved and educated by Salesian schools. She was set to be married at 16, but her illiterate father wanted her to continue her studies and, today, Kanchan wants to get into an all-female-run business, create job opportunities for the girls of her village and prevent them from getting married at a young age. On the occasion of the International Day of the Girl, celebrated today, October 11, her story wants to be and act as model to follow.

My dad has always been my hero. Because he is illiterate, he wanted his children to study. And he stood his ground against the will of the family, who wanted to give me away in marriage at 16. My grandparents and uncles wanted me to marry immediately. My uncle said his own daughter was all of 15. As she was younger to me, I had to marry first as per the sacred customs of our tribe. My father put his foot down. He said I would study up to grade twelve, or at least till I was 18. And so, here I am, all of 18+, still studying – and so happy!

I am Kanchan Kumari Sao. I am in the third year of a diploma course to become a Civil Engineering Technician. That is a long leap for an Adivasi tribal girl, daughter of an illiterate father from a remote village in the jungles of Jharkhand.

My father, his four brothers and their families lived together in one house as a “joint family”. Those days there was no school in our village. When I was three years, Daddy migrated with us to Calcutta.

Till then he had only worked in rice fields and gathered forest products. In the city he started as a coolie on a construction site. But, he did have ambition. He wanted his children to study. He worked hard, earned, learned and kept growing.

Mommy had studied up to class IV. So she chose my school. English medium schools were expensive. I studied four years in a Hindi medium school. When my brother’s turn came, he also started in the same school. But, by then, my mother had discovered a special programme.

Don Bosco School, Liluah, caters to children from the middle class. They pay fees. But, towards evening, anyone can go there and have classes in English medium, though for fewer hours than a regular school. And it is FREE!

My brother attended both schools, in Hindi during the day and Don Bosco, in the evening. After four years of this, he was admitted into the regular course in Don Bosco. He is now in grade ten.

After my own grade four, I too tried the English medium; but, knowing only Hindi, I could not catch up with classmates who had started English right from kindergarten. So I went back to my old school.

Grade ten is an important step for us in India. The State’s Education Board conducts an examination and issues a certificate. That may get us a job, a little higher than pure manual labour. Despite the quarrel with the rest of our family, our decision remained that my schooling would continue. The next question was what I would study.

Our neighbor was a teacher in DBSERI (Don Bosco Self-Employment Research Institute) at Mirpara.  He suggested a vocational course there. “What is the use of Kanchan doing grade twelve unless she goes on to college after that? What job can she get with a grade twelve certificate?”

We studied the list of courses in DBSERI. Daddy had always been my hero. He worked in construction. I wanted to do the Civil Engineering Technician’s course. He could help me, maybe not with the theory, but with the practice. Mommy wanted me to do tailoring.

We consulted Brother Matthew. He looked at the grades I had scored, enquired about my likes and dislikes, studied my family background and advised me to do engineering.

“Tailors are dime a dozen,” he said. “The construction industry will continue to grow at a rapid pace since the Indian economy is booming. You can easily become a construction supervisor.”

He told us the story of Preety Gupta, also an immigrant to Calcutta from Bihar, who did the same course after her grade ten. She worked first for a company. Today she has her own enterprise with projects in 3 States. One of them is a sixteen-floor apartment building. She personally supervised it “from the first soil scoop of its foundation to the last stroke of the paint brush,” as she herself said.

The die was cast. I enrolled for Civil Engineering Technician – a three-year diploma course. Brother Matthew is so kind; he allows me to pay lower fees as my father is poor!

Unfortunately, I befriended the wrong girl in my class. We got into mischief, and bunked classes. At the end of the first year I failed my examinations. Daddy told me I could decide whether to repeat the first year or to drop my studies if they were too tough.

I resolved to change. I withdrew from the naughtier students. Strangely, as my grades improved, my close friend of old was envious of my growing success. I passed in my second attempt. I did not look back again. Now I mostly sit alone in class.

DBSERI gives us self-confidence besides our construction skills. We start to feel that we can do quality work, and even start, build and run a company of our own. There are lessons on management of a small enterprise. Co-curricular activities build up our personality. Girls receive equal respect as boys. I am so grateful to Don Bosco and Brother Matthew.

I am in the final year now. I am watching DBSERI’s “Nariprise”. “Nari” in Hindi means women. The word Nariprise is our own creation. It stands for “Women’s Enterprise.” It is an answer to a recent problem.

Three years ago, a girl was brutally raped and murdered in Delhi. After that, stringent new laws were passed. Some time ago a girl, a graduate of this school, was at work together with men. “Something” unacceptable happened. The male workers suffered, and the company had bad publicity and legal problems. After that, all construction companies quietly sent off their female employees. No one hires women now.

Brother Matthew had encouraged a lot of girls to get into this reserve of males. He felt bad that they now had nowhere to go. He then came up with this idea of Nariprise. Twelve of the 24 female graduates accepted Brother’s challenge. They registered themselves with the Government as six small companies.

Brother had a friend, a contractor. He asked him to subcontract the construction of toilets and kitchens to these girls. The contractor was afraid to take risks with a bunch of green-horns, just out of school, all of them GIRLS! The girls offered him their skills, for free, for ten toilets and kitchens. He could continue with them only if they met his standards.

They did it! The first toilets and kitchens were on schedule, and they won contracts for the rest of the building and, later, for two more buildings.

Nariprise is very small right now. We shall soon be larger and better. Rich people are afraid to risk money on new things. We have no money to invest. But, we invest ourselves and risk our future. We have confidence in our skills, our hard work and our leader.  He loves us. One day we shall break free from him. That is precisely what he expects from us.

We could grow faster if we had some seed money. We need to invest in training the masons we employ and in tools. We need more mechanization.

I have many dreams. The first of them is to build a house of our own. In the village five families were cramped into one house. In Calcutta we spend on rent. I will build my own house.

My second dream is the means to the first – a construction company of my own. I will start very small but, I will make it grow. I will earn and also give employment to others, particularly women.

I have a dream also for the girls in my village. I refused to get married at fifteen. Nevertheless, my uncle married off his daughter – younger to me – before she was even 18. Girls in my village, or anywhere else, should not marry so young.

I like it when I visit my village. The forest is beautiful, not like Calcutta with its crowds and filth; the company of my cousins and uncles is enjoyable; the fresh food is delicious. But, people are so poor. They can only do manual labour in the fields. And girls get married so young!

There is a school in my village now; but it is has very poor standards. Most children, especially girls, do not go to school. Parents fear two things about educating girls. One is that when they are away from home, they may be raped and even killed. The other is that they may marry unsuitable boys. But, not educating girls is not the solution.

I will one day influence my people so that all boys and girls get equal opportunities to study, and to study as long as they want to. That day I will feel that I have fulfilled my dreams.

On the occasion of the International Day of the Girl, let us remember that: