RMG - Our Lady of Aparecida: 300 years of grace, for Brazil and for the world
Featured 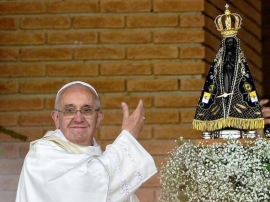 (ANS - Rome) – On October 12, 1717, exactly 300 years ago, the discovery of the statue of Our Lady, which gave birth to the devotion to the Virgin of Aparecida, took place at Porto Itaguaçu, in today's state of Sao Paulo, Brazil. Since then, the Brazilian people have always grown up in loyalty and filial love towards their Patroness.

Domingos Garcia, Filipe Pedroso and João Alves, three fishermen of the village of Guaratinguetá, went to the Paraiba River one day. They threw their nets several times, but in vain. They then moved six kilometers to an area called Porto Itaguaçu, tossed their nets. At some point, João Alves's net was weighed down; on pulling the net, he discovered a statuette with the semblance of Our Lady of Conception, its head missing. He again tossed his net; this time, he also recovered the statue's head, about thirty centimeters in length. When the three fishermen again tossed their nets, their nets filled with fish.

For about fifteen years the statue of Our Lady remained in the house of Felipe Pedroso; in 1733, he gave it to his son, who built a small chapel for the statuette in Itaguaçu. In 1745, another building was built, bigger, but the flow of faithful forced them to build ever-larger churches.

The present basilica, consecrated in 1980 by John Paul II, is only slightly smaller than the Vatican basilica. Every year, it is visited by circa 7 million pilgrims. Pope Benedict XVI visited on a pilgrimage in May 2007, and donated a Golden Rose to the Shrine. Pope Francis visited in 2013; on that occasion, he said, "how much joy it gives me to come to the home of the Mother of every Brazilian."

The Aparecida Sanctuary, in 2007, was the location for a milestone in the recent life of the Latin American Church: the Fifth General Conference of the Episcopate of Latin America and the Caribbean. Jorge Mario Bergoglio was the Coordinator of the Drafting of the Final Document. Speaking of that experience, Pope Francis recalled that on that occasion the presidents felt "encouraged, accompanied and, in a sense, inspired by the thousands of pilgrims who were daily entrusting their lives to Our Lady... That Conference was a great time for the Church... as... the document of Aparecida does not end in and of itself; the final opening is on and towards the mission."