RMG - Eradicate poverty from Venezuela, Myanmar... from the world
Featured 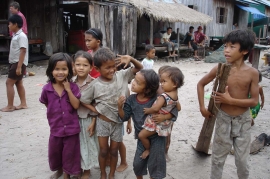 (ANS - Rome) - An International Day to focus on the theme of poverty, to remember that millions of people are in fact banned from living with dignity, that it is necessary to act soon and to work as a community to eradicate poverty from the face of the earth. On this occasion, some shocking situations.

From a recent Caritas report in Venezuela, the figures on poverty and malnutrition affecting the country's children are, at best, alarming. According to the study, with estimates from April 2017 to August 2017, in 32 parishes of Caracas and the states of Miranda, Vargas and Zulia, "14.5% of the examined children suffer from moderate and severe malnutrition; 21% suffer from mild malnutrition, while 32.5% are at risk of malnutrition."

Data also shows that 68% of children "have a nutritional deficit or are at risk." In 71% of the households contacted for the study, deterioration of food quality was reported; 64% said they were experiencing a food shortage; 63% claimed to buy groceries on the black market.

Children, young people and the elderly are wandering around Venezuela's city streets for food. They dig into the rubbish to find a bite to eat. They walk into fast foods to ask for some of the food clients are eating, or they stand at the entrance to bakeries for bread from customers.

Other continents, other latitudes, same situation: in Mandalay, Myanmar's second largest city, there are many children who, forced by poverty, live on the street. For this reason, the Archdiocese, involving several congregations and entrusting the local Salesians with the coordination of the project, launched an initiative to provide support to the most vulnerable sections of the population.

They are young orphans; lepers; people ill with HIV and cancer; children with various disabilities; blind children; poor children; prisoners, both male and female; victims of natural disasters... Twelve, the umber of categories the Salesians and other congregations protect.

When they visit, the religious give the poor and the afflicted courage and support, bring small, but useful, gifts: personal hygiene kits, multivitamin tablets, medications of various kinds.

"I promise the fervent prayers of all the religious of the archdiocese and the sincere gratitude of all the poor beneficiaries," says Fr Peter Myo Khin, Salesian at Mandalay, in asking for help to eradicate poverty.