RMG - Working together to protect minors on the Internet
Featured 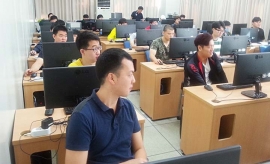 (ANS - Rome) - Sexual abuse of minors exists in all societies, cultures and countries around the world. The evil is much more widespread than commonly thought: according to EU data, in Europe alone, a boy or girl in five is sexually abused. For this reason, the Center for the Protection of Minors of the Gregorian University has recently organized the "1st Global Congress" on "Dignity of the Minor in the Digital World"  - to which Pope Francis also sent a message.

"The Internet, which is a wonderful communication tool, can become very dangerous," said Fr Hans Zollner, President of the Center for the Protection of Minors. "There are phenomena such as sexual violence on children, which are recorded and broadcast for money over the network worldwide; phenomena such as sexting, for which many girls are urged to take and send photographs of themselves nude, and are then blackmailed or submitted to being pilloried online; or more simply all those situations in which the nearly 800 million children using the network make contact with strangers, all of whom risk falling into very bad situations.

Why, in his message to Congress participants, Pope Francis warned of three dangers: underestimating the damage done to minors by the abuses suffered on the Internet; thinking that technical solutions, filters, and more sophisticated algorithms are sufficient in dealing with problems; having an ideological and mythical vision of the Internet as a kingdom of unlimited freedom.

So Pope Francis cited a variety of different ways to combat the great challenge of defending the dignity of minors in the digital world: "These include raising awareness of the gravity of the problems, enacting suitable legislation, overseeing developments in technology, identifying victims and prosecuting those guilty of crimes. They include assisting minors who have been affected and providing for their rehabilitation, assisting educators and families, and finding creative ways of training young people in the proper use of the internet in ways healthy for themselves and for other minors. They also include fostering greater sensitivity and providing moral formation, as well as continuing scientific research in all the fields associated with this challenge".

Participants of the congress, on their part, have drafted an official document entitled "Declaration of Rome", which opens with the title: "A society can be judged by how its children are treated" and launches a set of 13 appeals to different social categories, in the awareness that "while it is beyond doubt that the Internet creates many benefits and multiple opportunities in terms of social inclusion and education," the Network today also poses "unprecedented challenges to protect the rights and dignity of children and protect them from abuse and exploitation.

"Let's work together to always have the right, the courage and the joy to look into the eyes of the world's children," the Pope said at the end of his message.

The text of the Rome Declaration.