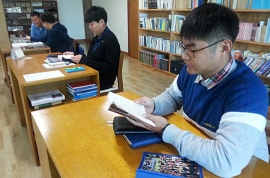 (ANS - Seoul) - With a growing percentage of Catholics, and the prestige and visibility that many of them enjoy in society – including the new President, Moon Jae-in, a Catholic - the Church in South Korea has for years been growing and flourishing. The Salesian Province "Martyr Saints of Korea" is also making a similar journey, clearly visible in a number of specific activities: the novitiate, the Mission Office and the service for young people at risk.

The Korean Salesian novitiate has, since 2011, been located in the coastal town of Naeri - a town surrounded by natural beauty and easily accessible from the capital, Seoul. Presently it hosts 3 novices, accompanied by their teacher, his associate and a community of 3 other Salesian priests, a Salesian coadjutor brother and a trainee. The activities are not limited to religious formation; the novices, in fact, collaborate in the animation of the initiatives taking place in the adjoining retreat house - which each year hosts about 9,000 young people - and those designed for poor young people and groups of the Salesian Family.

The Salesian Mission Office of South Korea, officially "Nanum Don Bosco" (where "nanum" stands for "sharing") was established in 2013 and has its headquarters in Seoul, at the Provincial House. It is currently directed by the Provincial Economer, Fr Isidore Hong, accompanied by two lay collaborators in the mission. Despite its young age, Nanum Don Bosco has already developed a substantial network of several thousand benefactors, well-defined procedures and specific fund-raising initiatives - such as a solidarity marathon and a parish bazaar. The relationship with the benefactors is maintained through a fortnightly newsletter, the sending of the Salesian Bulletin, the sending of holiday greetings, and the offer of a monthly Mass for the intentions of its donors. The main missionary projects that are financed concern Africa (with South Sudan as a priority country), Asia and Oceania.

Founded in 1962 as a missionary station, the center of Dae Rim Dong, in Seoul, is today one of the flagships of Salesian activities at the service of young people at risk. The center welcomes both young people who have begun the process of initial Salesian formation, and about seventy boys sent by social services or juvenile courts. There are many young volunteers, Salesian Cooperators and benefactors who make the Preventive System live through workshops of music, dance, carpentry and ceramics, sports, excursions, volunteer services, music and dance academies, group dynamics and also education to the faith...