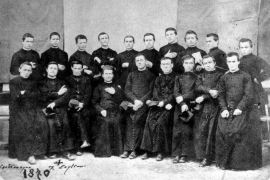 (ANS - Rome) - In Don Bosco's mind there was no other idea but to give himself to God through young people. Despite the few years of priesthood, he understood that "if we want to have a good society we must concentrate all our efforts on educating young people about Christianity. Experience has taught me that caring for young people is the only way to achieve a sustainable civil society." Thus, knowing he was doing the will of God, Don Bosco founded the Salesian Congregation, and 18 December 1859 can be considered as the "official date of the foundation of the Society of St. Francis de Sales" (MB VI, 335).

The name given by the founder was "Pia Società di San Francesco di Sales", or the Pious Society of St Frances of Sales, and at its origins it counted on 17 members (a priest, 15 seminarians and a student). The first Salesian Coadjutor entered the Congregation on 22 February 1860. The Church approved the Congregation on 23 July 1864 and officially recognized its Constitutions and Regulations on 3 April 1874.

Don Bosco gave the name of "Salesians" to the Congregation in honor of the holy bishop of Geneva, Francis de Sales (1567-1622). On 26 January 1854, Don Bosco gathered the first four people who were proposing to "have ... an experience in the practical exercise of charity with others" and "according to the words of Father Lemoyne, they took the name of Salesians for the first time. Looking back, this event would represent the first significant experience leading to the foundation of the Congregation in 1859," wrote Fr Arthur Lenti.

After these significant events, the Salesians inaugurated new presences: the first Salesian house outside Turin was in Mirabello, opened in 1863; while the first house outside Italy was in France, in the city of Nice, in 1875; the first center outside Europe was in Argentina, where the Salesians arrived in the same year.

On this day, when we celebrate the anniversary of the Salesian Congregation's foundation, let us not forget the words of Fr Ángel Fernández Artime, the Rector Major: "the first great sensation is that God continues to want Don Bosco's charism for the good of the young people of world."