RMG - A sad Christmas for millions of children
Featured 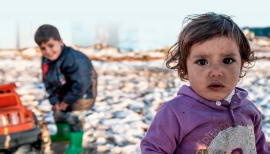 (ANS - Rome) - This Christmas, Pope Francis called upon all men and women of good will to see the faces of suffering children in the face of the child Jesus, to think of the many children in the world who suffer and are victims of war, violence and forced migration. To understand the import, some data.

In their attempt to migrate from Libya to Italy on the central Mediterranean route, over 400 children have died this year; meanwhile, thousands were victims of abuse, exploitation, slavery and detention as they traveled through Libya. The emergency beckons – to Europe and the world of Unicef - about 50 million children on the planet are migrating; of these, about 28 million are migrating from their homes due to armed conflicts.

School-age children who took no part in any school program in 2007 were 12.8% of the total, that is: 135 million. Forty percent of these future adults with no education live in the vast areas of the underdeveloped world or in war-torn zones.

Despite the progress achieved globally, one child out of twelve in the world lives in a country where their current prospects have worsened in comparison to their parents.
180 million children live in 37 countries where - today - the chance of falling into extreme poverty, of being unable to attend school, or the probability of dying in a violent fashion are greater than they were 20 years ago.

It almost seems we do not see or admit how the children's future has worsened compared to the past.

During this Christmas season, this should make us think.