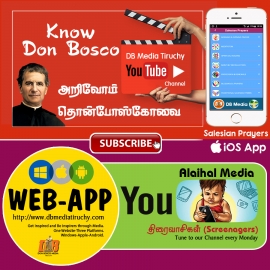 (ANS - Tiruchy) - "Don Bosco Media" is a center for the arts, media studies and communications located in the Salesian Province of Tiruchy, Tamil Nadu State, India. It is equipped with high-level technologies, knowledge and skills, which it uses to offer young people the best education in the fields of media studies and art. Its ambition is to bridge the digital divide between rich and poor through formal and non-formal education to the media and help its students to think critically, express themselves creatively, communicate effectively and actively involve them in the process of socio-cultural transformation and personal development.

With its production units and equipment, state-of-the-art facilities and studios, Don Bosco Media offers formal and non-formal courses for young people who dream of entering the world of journalism and the media, as well as specific routes for children outside educational cycles and for marginalized teens.

Since its beginnings, Don Bosco Media has made itself present in the new media: today it has five linked YouTube channels it feeds with videos related to religious, social, educational and motivational aspects, and different apps developed for Android, iOS and Windows.

Every Monday, on its main YouTube channel, it publishes a video to educate young people on how to use the media correctly; through the "Alaihal Media Club", it creates awareness on media dynamics in many Salesian houses; Christian music albums are also regularly published and broadcast; its point of pride: the center has begun direct evangelization via media through the channel "Smart Liturgy", which broadcasts material of animation, liturgy, readings, posters, songs and psalms, and related, on every Sunday and on Christian festive days.

Now Don Bosco Media has developed a new initiative called "Know Don Bosco." It is a series of videos on Don Bosco loaded daily throughout January, the month of Don Bosco. Following the maxim, "To know Don Bosco is to love Don Bosco", the multimedia center wants to make the Saint of the Youth known to as many people as possible by publishing a video every day on some aspect or event of Don Bosco's life. The videos are narrated by a Salesian and can also be used for homilies and Salesian "good nights."

To get to know Don Bosco Media in person, click here or visit https://dbmediatiruchy.com/