Brazil - "She opted for strategies against violence": Laura Vicuña and intra-family violence
Featured 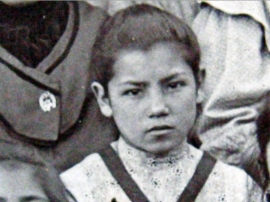 (ANS - Manaus) - Laura Vicuña, a blessed of the Salesian Family, whose liturgical memorial was celebrated last 22nd January, is considered the patron saint of victims of ill-treatment and intra-family violence. To understand why, it is necessary to consider her personal history and perceive, in the course of her short life, her strength and her resistance to domestic violence.

From a very early age, Laura not only lived alongside intra-family violence, but she was also a victim, suffering from the terrible violence of sexual harassment by her stepfather.

And although in biographies she is often simply presented as the daughter who offered her life to save her mother - having been, indeed, represented for many years as a serene and delicate little girl with European features - it is necessary to explore her personal history and perceive in the life's journey her inner strength and her resistance to intra-family violence.

Laura Carmen Vicuña, daughter of José Domingos Vicuña, a soldier, and Mercedes Pino, was born in Santiago, Chile, on 5 April 1891, during the civil war. Shortly after her birth, her father died and her mother moved to Argentina to look for work. She eventually found work at the home of Mr. Manuel Mora, in Quilquihué. Mercedes became the man's lover, and this caused Laura much suffering.

The figure of this blessed adolescent, who died at the age of 13 on the evening of 22 January 1904, is in perfect harmony with the theme of the Fraternity Campaign proposed by Brazil's Episcopal Conference (CNBB) for 2018 entitled, "Fraternity and overcoming violence". Laura Vicuña fought bravely and rejected the attacks of the molesting stepfather, not with violence, but with divine intercession, asking fortitude from God for herself and the conversion of her mother as well as opting for strategies contrary to violence. In this sense, her decisions could not be other than the path of fraternity, which generates and promotes the culture of peace, reconciliation and justice.

Among female victims of violence in Brazil, the majority are teenagers and young people between the ages of 16 and 24. Domestic violence is one of the centers of action of the Salesian Family, which operates with actions and concrete initiatives to combat it.