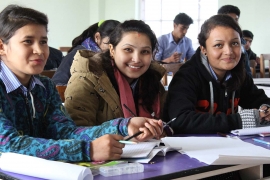 (ANS - Kathmandu) - Transforming Nepal's poor communities, beginning with children and young people, through education, vocational training and reconstruction of school buildings and related, necessary after the 2015 earthquakes: this is the commitment of "Nepal Don Bosco Society", the NGO representing the Salesians in the country.

Through their 7 centers scattered in different regions, the 18 Sons of Don Bosco active in Nepal offer quality, up-to-date, timely formation, as well as a typically Salesian environment. "Salesian institutions are welcoming centers where everyone feels at home and the formation given and the diplomas awarded help many in finding work in Nepal or abroad," says Ram Kaji Rai, a former teacher of the institute, now responsible for a company that imports IT components.

Many of the Salesian past pupils are able to boast rapid integration into the labor market, as employees or entrepreneurs. And it should not be underestimated that most came from poor communities: as in Sirsia, where the Salesian school was for many the only opportunity to receive an education, and where for 9 years the Salesians, thanks to the help of an Austrian NGO, implemented an integral development program that included the entire population, from children to the elderly.

The NDBS, moreover, has been fundamental for the relief to poor people after the natural disasters, such as the Terai region floods in 2017, and previously, the earthquakes of 2015. On that occasion, Salesians and their collaborators gathered aid and distributed food, tools and medical assistance to 3451 families in 12 districts; materials useful for life in shelters to 450 families in five districts; and uniforms and stationery materials in over 50 schools in Lalitpur and surroundings. "If it was not for the NDBS, my family and I would not have eaten for a week," says one of the elders of Lalitpur today.

In the subsequent stages of restoration and reconstruction, NDBS came to the aid of 87 schools in 12 districts for the construction of Temporary Learning Centers to prevent school pupils from interrupting their education. And currently, ten new permanent school buildings in 4 districts are near completion and set to open.

Being at the side of the poor and needy was - and is - the hallmark of the Salesian presence in Nepal.