RMG - "Migrations without trafficking. Yes to freedom! No to trafficking": a concrete response from the Salesians
Featured 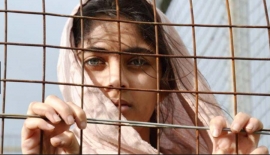 (ANS - Rome) - Trafficking in human beings is a problem of enormous proportions. The Fourth World Day of Prayer and Reflection against Human Trafficking, taking place a few days ago, is not simply a desire to mark or discuss the subject, but a commitment to raise awareness on an issue that hurts, makes many suffer, an issue that kills, destroys people.

The world day against trafficking was on February 8th, in memory of St. Josephine Bakhita. At the general audience of the previous day, Pope Francis had made two appeals: against the "shameful plague" of trafficking and for the PyeongChang Winter Olympics, which have us hope "in a world in which conflicts can be resolved peacefully through dialogue and mutual respect."

The testimonies on this scourge are chilling. There are countless stories of girls, women, men and children who, once saved from exploitation, fall into the hands of traffickers. It happens for the lack of real alternatives and for such deep internal wounds that make their social reintegration difficult.

The Salesians in the world make strenuous efforts against the trafficking of human beings through concrete proposals. Suffice to recall the work done in Ghana in the awareness-raising program for thousands of women. Another program full of hope is being carried out in Tambacounda, Senegal, thanks to initiatives aimed at offering valid alternatives to young people.

Despite the extremely high risks of irregular immigration, many people, especially young people, continue to migrate, without papers, and many end up in the hands of human traffickers - and not a few end up dying. The Salesians of Addis Ababa, Ethiopia, in addition to showing the dangers and consequences of irregular migration, work in the education of young people and in work training, so as to encourage their staying in their own land.

Nor should we forget the work of Fr Jorge Crisafulli, SDB, in Sierra Leone, who has created countless activities in support of children, adolescents and women in the street to distance and remove them from the claws of human traffickers.

The phenomenon of trafficking is a terrible scourge for which, alas, good will is not enough. "We must coordinate and collaborate at all levels and with all possible forces," explained Msgr. Juan Carlos Elizalde, bishop of Vitoria and Head of the Department "Women on the street and trafficking" in Spain.