Mexico – Something Beautiful for the “OTHER”
Featured 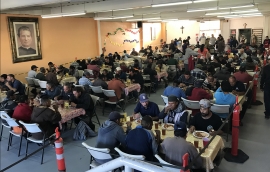 (ANS – Tijuana) – “Desayunador Salesiano Padre Chava”, the happening place in Tijuana for migrants, refugees and street-dwellers, the best symbol of Salesian commitment to the disenfranchised will soon be celebrating 80 seasons of dedicated service to the last and least of the people that live in this city bursting at the seams with a population growing by the day due to migration and deportation. The wonderful work being done by 9 Salesians and a host of volunteers in this Mexican - American border city of Tijuana is nothing short of the miracles in the Gospels.  Fr Pallithanam Thomas, the Salesian representative at the UN, recounts his experience at this “feeding of the 5000”.

Desayunador Salesiano Padre Chava is a kind of soup kitchen that reaches out to the migrants, the refugees, the deportees, the homeless and the street dwellers, in other words ''the OTHER'', a center run by the Salesians. Over 900 homeless people are provided a wholesome breakfast, daily! The efficiency with which the food is served is as good as any found at the Detroit Ford Assembly Lines. But that is not the salient feature of the outreach. The most impressive aspect of this apostolate is the dignified manner in which everyone is treated in the place. The outpouring of love and dedication one witnesses at Desayunador derives from the conviction that no one should be treated as 'the outsider'.  Moreover, despite the fact that though there is no allocated budget for the personnel and services provided, materials and volunteers needed never fail to arrive. The center offers a place to freshen up, food, clothes, medicines, haircuts, and even counselling and workshops for learning small trades.

The center was the initiative of Padre Salvador Romo Gutierrez, the Dreamer as he was known in the province, and his well wishers. It began its operation in January 1999. Father Chava was moved by the plight of thousands of those who had come to the border hoping to cross over to the United States of America to pursue their dreams for a better future. The border and the wall would become for them an insurmountable obstacle. Unable or unwilling to return to their countries (Mexico is the land route for other Central American countries to cross over to the US) and their homes these unfortunate people make the streets their home. It is to these homeless people that Father Chava reached out to, through the Desayunador.  Though Father Chava is no more, succumbing to cancer a decade ago, his spirit lives on and looking down from heaven he sure would be proud of his abiding legacy.

Presently, Father Ernesto Hernandez Ruiz and Father Shijumon Thottupurathu, originally from the Kolkota Province and who later on joined Central America province in Guatemala as a missionary, now animate the initiative. The activities though are being coordinated by Mrs Claudia Portela, a Salesian co-operator and missionary from Uruguay. The fathers along with Brother David Patience Komba from Tanzania also look after the Oratorio Santo Domingo Savio with the support of volunteers Isabel Riverberi and Daniel Rodriguez.

The Desayunador is but one of the several activities of the Salesian Community of Tijuana. Staffed by 9 Salesians and a host of volunteers both national and international, the Tijuana Salesian house is animated by Father Agustan Novoa, the Director. He has this great capacity to keep the community together in prayer, in living and loving and in shared responsibilities across 6 centers. In the main center Father Felipe Fernandez supports the director to look after the financial matters and to run the oratory attached to the center.

The vice rector Fr. Jesus Castellanos takes care of the parish of Maria Auxiliodora and the Oratory attached to the parish. He is supported presently by Ms Janeth Felix a volunteer and by other local volunteers who come regularly to the institution. Attached to the parish is an oratory which is a common feature in all the different centers. Father Richard Alejunas, a missionary from the United States, is in charge of the San Juan Bosco Oratorio which also runs a school. He runs it with typical American efficiency. Brother Miguel Nunez and Charles, a volunteer from Belgium, ably assist him. The largest oratory is the Oratory of San Jose animated by Padre Oscar Torres with the support of other volunteers, presently Ms Paula. Father Oscar's enthusiasm is contagious - him taking the initiative to sing and dance! This oratory is a place where hundreds of youth come to hone their skills in games, particularly soccer and basketball. It also has a skills development out reach programmes.

Being here for the last two months has been a wonderful experience, challenging inspiration and a great learning. What struck me most is how the community finds time to gather around the Lord daily, despite the multifarious activities that the members are involved in. The volunteers too share the Salesian life fully. The joy, the laughter and the banter at the table are to be seen and heard to be believed.  The words of the Psalmist, ''Behold, how good and pleasant it is when brothers dwell in unity!'' (Ps.133.1) are realized here everyday, in numerous ways. Indeed a splendid example of the true Salesian spirit, involving Salesians and volunteers.