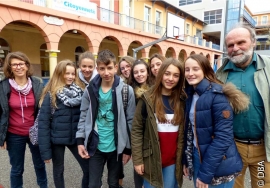 (ANS - Nizza) - Did Don Bosco really articulate an educational method? On 12 March 1877, in Nice, Don Bosco entitled his project: "The Preventive System in the education of young people". Those few pages are the only ones in which Don Bosco sketched a theory of his educational method.

The word "system", observed Fr Jean-Marie Petitclerc, SDB, in a recent conference, should not be understood in the sense of "systematic", but in the modern meaning of "systemic", as a set of elements linked together in a way such that if one is also modified the others are affected. This system is called "preventive" rather than "repressive". And the reason for Don Bosco is all in the words of St. Paul: "Charity is patient, charity is benign ... It covers everything, believes everything, hopes everything, and bears everything." (1 Cor 13).

The kind of presence of the educator with respect to the student is a friendly, enriching and beneficial presence, not a mere supervision. "The Preventive System makes the student a friend, who sees in his educator a benefactor who advises him and who wants to improve it," explained Don Bosco.

Even the world of education is governed by laws. In the Preventive System, the educational space is governed simultaneously by trust and by rules. "To educate in the manner of Don Bosco does not mean never to punish, but to punish in a Salesion-fashion," says Fr Petitclerc. "It is here that loving kindness becomes central. It is because you are precious in my eyes that I sanction this behavior that has negative consequences for you and your environment."

Don Bosco made his whole educational building rest on the triad: reason, religion and loving kindness. Reason means the rejection of authoritarianism and also that the educator always uses the discerning capacity of his interlocutor. By religion, Don Bosco meant Christian religious instruction and the practice of the sacraments of penance and of the Eucharist; in a non-Christian environment, the meaning of life and ethical references must be taken into consideration. Finally, as regards loving kindness, it is the affectionate goodness with which a young person feels loved. "The Salesian educator is modeled on the gentle St. Francis of Sales," explained Don Bosco.

We must be careful not to reduce the Preventive System to the few pages written in Nice in 1877. It is the style of Don Bosco himself: a set of manners, beliefs, actions, means, interventions, methods and structures.