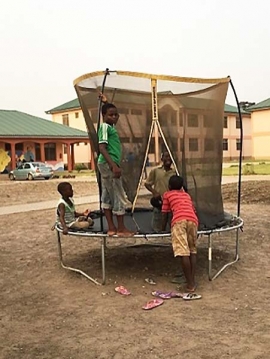 (ANS - Accra) - Accra, the capital of Ghana, located on the Gulf of Guinea, is a metropolis of 5 million inhabitants. In its metropolitan area, at Ashaiman, the Salesians animate two houses. The presence of the spiritual Sons of Don Bosco in the country then develops through two other communities, namely in the locality of Sunyani, about 400 km north-west of the capital. In both cities, as well as in the new center of Tatale, the Salesians work at the service of children and young people, especially the most in need.

The first center of Ashaiman is a technical school offering 5 professional fields of study: electrical, IT, electronic, solar energy and accounting. Seven hundred young people attend the three-year courses, at the end of which about half enroll in university. Established twenty years ago, the school is now considered the best technical school in the metropolitan area of Accra.

The second Salesian center is a home for children and teenagers who are victims of child trafficking. Currently the Salesians house 51 children, from the ages of 7 to 16. Often they are "wheelbarrow boys", children of extremely poor families with many children to feed, who work as unskilled workers pushing and carrying the most diverse materials with carts and wheelbarrows; others come from the gold and diamond mines, where they are used because they are small and move easily about.

The Salesians, following the example of Don Bosco, find in these children and young people the recipients of their focus and care.

At Sunyani, instead, the Salesians arrived 25 years ago and manage two other houses. One is the novitiate, which this year welcomes 12 young people, coming from Ghana, Nigeria, Liberia and Sierra Leone.

The second community manages three different activities: the Vocational Training Center with 500 students divided into five professional fields: construction, catering and cooking, metal carpentry, woodworking and electricity; the parish which the Salesians animate with help from the novices, with a Sunday Eucharist for adults (from 12 years upwards), and one dedicated only to children; finally, there is the family home for young people in difficulty, and it currently hosts about fifty minors. They are not orphans, but extremely poor young people, often with numerous siblings, so there is no food for everyone at their homes.

This is why they are taken to the Salesians, knowing that they have a roof, some food and, above all, the fraternal and sincere love that is never denied to anyone.