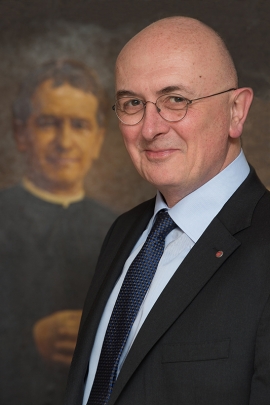 (ANS - Heilbad Heiligenstadt) - On May 8th, the annual congress of the administrators of the Scandinavian religious congregations took place in Heilbad Heiligenstadt, Germany. The event was also attended by Br. Jean Paul Muller, Salesian Coadjutor, Economer General of the Congregation. His speech started from an analysis of today's society, in which most people feel vulnerable and marginalized.

Institutions are doing too little at the local level; indeed, they often accentuate the degree of discrimination within society. Br. Muller asked the institutions to develop a broader vision and to create new affordable housing for the less affluent social classes.

The politics or policies of the Scandinavian countries often tend to create centers containing large numbers of people, including refugees. As a result, these centers become "slums", social slums, where people feel isolated from the rest of society. To tackle this problem, it is necessary to start a new policy that leads to the construction of new homes.

In the field of pedagogy, programs must be brought forward that are not dedicated only to young people entering the labor market, but also to immigrant mothers, teaching them, for example, the languages of the countries where they have recently arrived.

Br. Muller then asked the leaders of the religious congregations to increase and improve their synergy, especially at the European level, in order to give new meaningful and significant answers with a focus on several specific issues and, at the same time, work to involve other social actors.

Don Bosco has shown that "at the moment of life in which we find ourselves, that is, after birth and before death, we have the possibility of being able to change things."

Anyone baptized in a Catholic or Protestant, Anglican or Orthodox Church has the great task of expanding the world view, helping others to look for – and find - themselves.

In Europe there is no need for administrative offices, but for pastoral care, which has in itself also formative moments and which can support certain specific social categories, such as: single mothers, impoverished elderly people and the unemployed over-40s. All of these people feel disoriented in a society that does not offer them the opportunity to realize their dreams and plans. Pastoral care can instead give them the opportunity to be an active part of society.