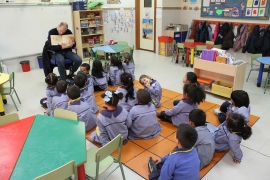 (ANS - Madrid) - Catholic-inspired education is one of the Church's most important activities in Spain. And it is also one of the activities that brings more economic benefits to society. This is attested by a study on the impact of the Church's educational activity presented by the Office for Transparency of the Spanish Episcopal Conference at the "Santo Domingo Savio" Salesian Institute in Madrid.

Elaborated by the "PricewaterhouseCoopers" consulting firm (PwC) on 2016 data, the study shows that the investment of the State and society in the country's Catholic-inspired centers amounted to 4.866 billion euros for that year, and that it will produce an approximate benefit of 19.735 billion euros. Hence, for every euro paid to Catholic education, four are returned to the benefit of society.

In Spain, approximately 1.5 million students attend the 2,591 non-university education centers (Primary, Secondary and Baccalaureate Courses) with a Catholic orientation, in which 102,476 teachers work. To these must be added 15 universities and a university linked to the Church, which altogether form another 87,425 students.

This study aims to maintain the Church's commitment to transparency in Spain and, at the same time, to appreciate and raise awareness of the work it does to the benefit of society. Ester Martín, Director of the Transparency Office of the EEC, said: "It is not just a matter of giving data, but that these are relevant and understandable and shed light."

María Luz Castilla, Head of the PwC study, explained that the methodology used to obtain the report is internationally acknowledged for its prestige. Among the parameters considered were school dropout rates, the unemployment rate and the economic capacity of people educated in Catholic-inspired schools.

The schools of the Salesians and of the Daughters of Mary Help of Christians in Spain are one of the largest non-university educational networks in Spain. Together the two congregations manage and animate 138 schools, attended by 96,000 students and 6,235 teachers. To these must be added 60 Vocational Training Centers, in which 18,700 students study, followed by over 1,400 teachers; and the "Centro de Enseñanza Superior Don Bosco", in Madrid, and the "Escuela Universitaria Salesiana de Sarrià" in Barcelona, which educate about 1,500 university students.