Venezuela - Religious in the country, "heroes alongside the poor of Venezuela"
Featured 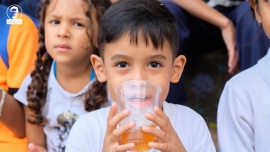 Once Venezuela was the richest state in South America, but the disastrous economic policies, which focused everything on oil and depressed other productive sectors, transformed in a short time a prosperous nation into a country that is destitute: inflation levels are close to 5,000% per year, storekeepers are forced to raise prices at least twice a week.

"A kilo of milk powder costs more than the average monthly salary. How can the Venezuelan mothers feed their children?" asked Cardinal Jorge Urosa Savino, archbishop of Caracas, just a few days ago at a press conference organized by the Pontifical Foundation 'Aid to the Church in Need' (ACS).

According to the national Caritas, at least 16.8% of children are severely malnourished: malnutrition has already claimed many victims among the youngest and many are dying or are in danger.

In this dramatic situation, the Venezuelan Church seeks, even with very limited resources, to satisfy the needs of the population. "In many parishes the Church feeds Venezuelans through 'solidarity pots'. Our priests and our religious are really heroes alongside the poor of Venezuela," said card. Urosa Savino.

And in the silent but fundamental movement of solidarity, there are also the Spiritual Sons of Don Bosco: present in the country since 1895, they have spent more than a century alongside the Venezuelans, offering them education and support. But now they have been forced by circumstances to change priorities and they, too, are also on the front line against rampant violence and hunger.

The primary objective is to guarantee nutritional support to those who gravitate around their centers. Already now they are providing, even if with different solutions depending on cases: there are parishes where a soup is distributed once a week, schools where 3 meals a day are offered, other educational facilities where a daily snack is given.

In order to strengthen this much-needed solidarity initiative, "Missioni Don Bosco" of Turin has launched an appeal for solidarity.