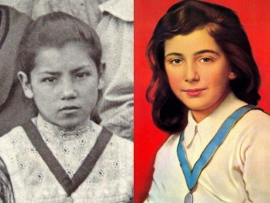 (ANS - Lisbon) - We have decided to learn more about a figure who is among the "young people who have changed the world": her name is Laura Vicuña.

Laura was born April 5, 1891, in Chile. She was the eldest daughter of José Domingo Vicuña and Mercedes Pino. At the end of the nineteenth century, Chile was going through a politically difficult period and Claudio Vicuña, a distant relative of Laura's father, was involved in a dispute over power, thus putting all his family in danger of death.

Barely over the age of 3, Laura remained without a father. Her mother, Mercedes, found herself almost in poverty, so that, together with Laura and another daughter, she took refuge in Argentina. In search of work, she arrived at the Quilquihué estate, belonging to Mr. Manuel Mora. He enticed Laura's mother to become his lover, offering her the education of her daughters in return.

Laura could therefore study at the "Mary Help of Christians" school. As a child she told herself that she wanted to serve God and that she was willing to "give life to God and to not sin".

While growing up, Laura was the victim of two attempts at violence by Mr. Mora. One day Laura fell ill and her mother decided to take her to Junín, thinking that she would be healed there. But Mora arrived, insisted on staying there with them. Despite the fever and weakness, Laura insisted that this should not happen and for this she was beaten by  Mora.

Before dying, Laura said to her mother: "Mother, two years ago I offered my life to Jesus for you, to ask for the grace of your conversion. Will I have the grace to see you repentant before you die?" "I swear to you I will do what you ask me! God is a witness of my promise," the mother answered. Reassured by this news, Laura Vicuña died January 22, 1904, not even thirteen.

In 1986, Laura Vicuña was officially declared Venerable and in 1988 Pope John Paul II proclaimed her blessed, following the recognition of a miracle occurred in 1955 through the intercession of the young girl, and thanks to which a religious recovered inexplicably from a pulmonary disease.