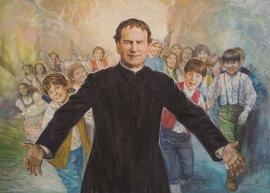 (ANS - Rome) - Many elements that are traditionally associated with the figure of Don Bosco, such as the oratory, educational institutes or vocational training schools, were not his inventions. And yet nothing of what Don Bosco took and reinterpreted remained the same after his passage: with what were already known elements, he was able to create universally appreciated models that have remained valid over the centuries – still as current and young as he is.

Don Bosco's secret was probably in his dreams. Before a wayward boy or one without a family, he did not see what everyone else saw - a future criminal, a good for nothing ... He "dreamed" the adult that young man could or would become: a master craftsman, with his technical skills and human qualities flourishing. Provided, however, that there was someone willing to cultivate them beforehand.

His young people were always in first place, not only in his heart, but also in his daily life. Records reported that Don Bosco interrupted his most important talks or meetings for only two reasons: if the Pope called him or if a boy had problems.

Among the thousand activities to which he was dedicated - the oratory, the development of his House, his duties as a priest, the charity done to the poor and his requests to benefactors ... - he managed, however, to always leave space for direct dialogue with his boys. Listening, therefore, first and foremost: to their stories and to their experiences. And then he would offer a liberating piece of advice, a "little word in the ear" that could melt away anxieties and fears.

Even when young, Don Bosco managed to absorb something good wherever he was: he learned the tricks of the acrobats to amaze his peers, he learned the hard farm work in the fields, learned also from painful experiences, how to attend prisons and assist those condemned to death. All this led him to mature an extraordinary wealth of experience that he used in his task as an educator.

In an age wherein many men of the Church still showed a great distance towards the poor, Don Bosco embodied the closeness, the proximity, the outgoing Church already then, which sought out the last and the forgotten: not surprisingly, the whole Salesian house was born from a kind gesture to a young brat, Bartolomeo Garelli.

Even today all over the world, thousands of families send their children simply "to Don Bosco". Because Don Bosco is always current.