France - «Go to the pump!» Education according to Don Bosco
Featured 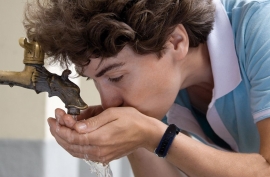 (ANS - Lyon) - When the educators came to Don Bosco to complain that they were not listened to by the young and did not know how to deal with them, Don Bosco used to say: "Go to the pump!" There was a fountain in the courtyard of the Valdocco, around which the young men jostled each other to drink or soften the hard breakfast bread. There, the educator, mingling in a queue, could listen to their conversations, learn their interests. Don Bosco also suggested that the educator be less hard, to "sweeten" his daily life.

The courtyard or playground has always been a privileged place in the preventive system of Don Bosco, as important as the classroom, the church, the halls and refectories. Don Bosco, who theorized little about his preventive system, at the end of his life, wrote a letter dated May 10, 1884, in Rome wherein he expressed his pedagogical thinking. He chose to give it the shape of a dream.

The spectacle of the old courtyard was: "Familiarity produces affection and affection generates trust. This is what opens hearts ... boys who submit gently to all the orders of someone they are sure loves them."

But slowly things have changed: we read in gestures and faces a boredom, a weariness, a bad mood, a suspicion that hurts the heart. From here arise whispers, criticisms, with the result that many do not follow their vocation.

Yet educators work hard, but it is not suitable. It is necessary that "not only are the boys loved, but they know they are loved!" And for this: "let them be loved in what they like, that we adapt to their tastes as young boys, and that they learn to discover love in things that they naturally do not like ...".

It is not enough to be in the courtyard. What young people want are "significant or meaningful" people who do their job as teachers, economers and director and who become at playtime, coaches and partners. These adults are the figures of a father, brother or confidant friend.

There are many reasons in the schools for teachers not to be present at the break. But the means are numerous to experience moments of closeness with initiatives such as a cultural excursion, a sports competition or a simple weekly presence of fifteen minutes in the yard.