Syria - One single man, Don Bosco, is able to make so many people happy all over the world
Featured 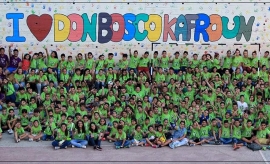 (ANS - Kafroun) – We would like to share a summary of the testimony of Mariangela Branca, 23, of Rome, who in collaboration with the missionary office of the Salesian Circumscription of Central Italy (ICC), has volunteered at the Salesian Oratory of Kafroun, Syria.

This Salesian house is truly impressive; now with the new terraces, it is even bigger and has more potential, having plenty of space even outdoors between the playgrounds and the garden. When I arrived here, in mid-July, it really seemed like a little paradise, in a mountain landscape that was quiet, profound and genuine.

The activities that animate the house are many, especially in summer: the main one is the youth summer camp, which involves many children and young people for three days a week and the final show; in addition to this, there are various activities and courses for adults and children; then there is Sunday Mass for the formation for young people; moreover, they play various sports in the functional external fields all year round.

I spoke with some animators to have them tell me how they live the oratory and how they see the presence of Don Bosco in this context: they explained to me that it is fundamental for the union between the children and the young people of the surrounding villages. The area around here has not been directly affected by the war, but indirectly it has been struck by much hardship such as the lack of electricity, the lack of water and the disproportionate increase in the prices of basic necessities.

In addition to this, they tell me that during the war they were afraid that the fighting would come here too, because no one knew how the situation would change from one moment to the next. Precisely for this reason, the young children of the oratory speak to me of this house as a second home, a house in which they felt protected, during the years of conflict and still today, a place to forget the fears and the horrors.

This area, being a place of peace, has been the refuge of many who, coming from the most affected areas not far away (Aleppo, Homs, Damascus, Idlib ..) had momentarily moved here. Many have remained, others have returned to their cities of origin because they are safe again.

This "wave" of people from other cities destabilized everyday life a little, but was very well received by the small population of the place, because they knew perfectly well what their countrymen ran away from. So here a real city was formed, Mashta and its surroundings: some animators told me that it had become a "Little Syria", since they could meet people from any part of the country.

Even the Don Bosco was also very important in this process, because in fact it has passed from hosting about 150 children to hosting more than 600. It was not easy at the beginning for all the children who joined the activities because many of them were traumatized from what they had experienced and were often nervous or restless. Truly the work of this place was miraculous and sewed many wounds, and they are all grateful to Don Bosco Kafroun. The words most used by everyone are always "second home".

An animator who moved from Aleppo here, because the city was no longer safe, told me that when she arrived she felt welcomed, that she was impressed by the faith and the genuineness of the people of the place.

There is so much hope in this people and it can be seen in the reconstruction already begun in many cities like Aleppo. I see the light of hope for the future, even if sometimes a little shy, in the eyes of these young people who have a great desire to do and learn.
"See - they tell me - one man, Don Bosco, was able to make so many people happy all over the world, incredible!"