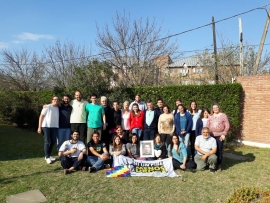 (ANS - Córdoba) – Even centuries apart, looking deeply at Don Bosco, it is possible to ask oneself: "What or how would Don Bosco feel? What was inside him? Who did Don Bosco love?" The answer is so clear and transparent that there could be no mistake: the Lord, the young, the desire for their Salvation, his profound love for them. In fact, one of the programmatic articles of the Salesian Constitutions states: "Our vocation has the seal of a special gift of God: the predilection for young people."

In September, the meeting of Salesian works in vulnerable contexts took place. The representatives of various Salesian centers in the country met to form and share concrete practices. One of the fundamental reflections was the study of the Don Bosco Preventive System from a perspective the participants themselves described as new and promising.

Not lacking were the fraternal moments of research and reflection on their experiences. One of the meeting's key elements may be summarized as follows: "Do not lose Don Bosco's love for the young. We can change the structures, but the love for the young is immutable."

During the final evaluation, the 20 participants had the opportunity to express several considerations: "Thanks to the Salesians, their heart beats like that of Jesus Good Shepherd. And at the same time like that father who goes to work in the village." "To know other realities of the Work of Don Bosco encourages me to continue to grow, to think about what we can do and also to give value to what we have in the oratory." "That boy is no longer the one who took drugs. He is a person with a name, a surname, an age and a story. The challenge now is to make it a reality in our communities so that it does not remain a dead letter."

"Do not lose the love of Don Bosco for the young" are not mere words, but are experiences and above all a change of mentality and life at the service of the young. Don Bosco's heart beat for the young. Fr Rua wrote in 1894: "Don Bosco did not take a step, he did not say a word, he did not put his hand to any undertaking that did not aim at the salvation of youth. The only thing that really interested him was their souls."

The Saint's answer is extraordinary when the Marchesa Barolo placed him before the choice of leaving the Oratory or the Refuge, Don Bosco did not hesitate for a moment. His choice was very clear: "I have consecrated my life to the good of youth." His life for the young, to them consecrated.