RMG - Paul VI, the Pope who loved the Salesians
Featured 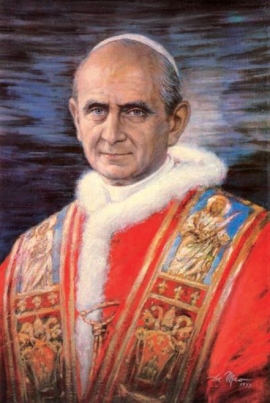 (ANS - Rome) - On Sunday 14th October, Giovanni Battista Montini, made Pope Paul VI on June 21st 1963, will become Saint. To card. Ottaviani, who gave the announcement of the election, it was enough to pronounce the name of baptism: "Joannem Baptistam ..." to arouse a very long applause.

Throughout his life, Paul VI always showed a strong affection for the Salesian Family. His father Giorgio was greatly devoted to Don Bosco and next to his desk hung a picture of Don Bosco, with the words: 'In death we gather the fruit of good works'. "It is a saying of Don Bosco, which was textually impressed in my heart," the Pope told the audience at the Salesian chapter on January 26, 1978.

His relationship with the Salesians had been close since his youth: it was a Salesian, Fr Antonio Cojazzi, to develop the Salesian and missionary vocation of a cousin of the future Pope; during his brief service (June-October 1923) as a clerk at the Nunciature in Warsaw, Fr Montini admired the Salesians' work in that land. He went to Oswiecim for the inauguration of a Salesian school and stopped in Krakow for the Salesians in the future parish of Karol Wojtyla. In Rome he had cordial contacts with the Salesians in the Holy See and with several communities of the Castelli Romani. He also shared the joy for the beatification (1929) and canonization of Don Bosco (1934).

In his service at the Vatican Secretariat of State, he directly supported the action of the Roman Salesian Family with needy minors, particularly through the "Borgo Ragazzi Don Bosco". As archbishop of Milan he had the same predilection for the youths of the "Sant'Agostino" and of the Daughters of Mary Help of Christians houses present there. To the Sons of Don Bosco he entrusted the Arese juvenile reformatory: it was an arduous undertaking, but he assigned it to them, trusting that they would be able to recover those young people at risk.

As a Pope he was able to measure and appreciate the global dimensions of Salesian work, to ascertain the relevance of the Salesian method for the needs of youth and to cultivate family relationships with Salesians active in the curia.

In 1978 he addressed the Salesians of the XXI General Chapter: "Be blessed ... Be filled with graces that the Lord makes us desire for you ... Be truly Salesians! [Among the many meetings, this between us] what moves us in a special way and gives us joy and hope is that the Church today be truly that of Don Bosco, the living Church."