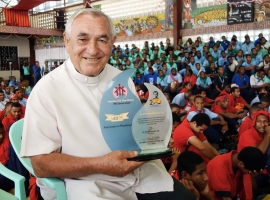 (ANS – Rapolo) – Fr Valeriano Barbero, SDB, is a pioneer of the mission in Papua New Guinea.  The Salesian mission was launched in 1980 by Fr Valeriano Barbero, Fr Rolando Fernandez and Salesian brother Joseph Kramar. They started their work in Araimiri. Fr Barbero recently celebrated his 80th birthday and is now building spacious dormitories for students at the Don Bosco Agro-Ed Complex, Vunabosco, Rapolo. He shares here his spirituality and love for Our Blessed Mother that have been his source of strength and courage, especially when things were difficult.

The summer holidays had started. The second-year high school in the seminary was over. I had just arrived home. My mother handed me a closed envelope with my address on it. I opened it in wonder. The content was clear and the message given did not allow alternatives. “After…bla, bla, bla … you cannot return for the third year as we realized that you do not have any vocation to become a priest.”

People from my village are known to be hard headed and not easy to give up. Without asking advice I wrote a letter to the Missionaries of the Consolata telling them about my desire and internal urge of becoming a priest and a missionary. Their answer was a clear NO.

In those days, a Salesian, Fr Angelo Miglio, a late vocation, returned to the village to visit his family. Coming to know about my case and my stubbornness, he asked me if I wanted to go to the Salesian Formation House. God forbid! My parents would never have consented because to go to a Salesian school meant money and my family did not have that money. But Fr Angelo was not worried. He simply said: “Get ready. We go.” And the adventure began.

I became a Salesian, a priest and a missionary and without any experience, a builder.

In the Philippines, when I was still a brother and assistant of the novices, Fr Jose Luis Carreno told me: “Ask for the grace: that before you die, you may build a church dedicated to Mary Help of Christians. Remember that you owe it to her for your being a Salesian!’’

I realized only then how my past troubles were in fact only turning points in order to join Don Bosco.

I started to do something for the Blessed Virgin Mary.  As soon as I was able to collect some money, I ordered a beautiful marble statue of Mary Immaculate which I sent to Canlubang (FIN), where I had met Fr Carreno and learnt from him how to love the Madonna of Don Bosco.

Then, after few years as a priest, I became the Provincial Economer. I started building the Shrine of Mary Help of Christians in Paranaque. We started the construction with no budget and without any money, but simply putting our trust in the story Fr Pierangelo Quaranta used to repeat.  He had gone to the Nuncio in the Philippines to ask for money. In reply the Nuncio said: “Why do you approach me for money? You have a banker: build her the bank, and you will always have what you need and in abundance.”

While in the Philippines I had an unforgettable Marian experience. They were the hot times before martial law was declared.  A young man came to the school looking for a priest who could accompany him and give the blessing of Mary Help of Christians to a dying woman. I was sent and reluctantly went with that young man through the labyrinth of roads to the poorest zone of the parish. I was the centre of attraction - a white priest in that place!

Reaching the place, I saw a woman lying on a mat. Several women were surrounding her. I approached the mat. Noticing how embarrassed I was, one of the women said: “Please give her the Blessing of Mary Help of Christians.” I obeyed without uttering one word. The prayer of blessing was not yet ended when I noticed a relief on the face of all bystanders. The woman had died. I was then told that this woman had been in a coma for several days. However, her wish was not to die without receiving the Blessing of Mary. That in fact was the promise of the prayer to Mary Help of Christians she was reciting every day. The young man who came to fetch me was her son. He wanted his mother to die in peace.

Our arrival in Papua New Guinea has always been under the guidance of Mary. The statue of Mary Help of Christians, now venerated in the chapel of Emmaus Retreat Centre, flew together with us on the plane to Papua New Guinea. Our arrival in Araimiri (14 June 1980) was the day dedicated to the Immaculate Heart of Mary. We could not hope for better omens for starting our first missionary presence in the country. Prayer to Mary became regular.

We were invoking her in all our needs: when we needed water, food and protection against the so-called land owners and the rascals. We also lost at sea 100 aluminium roofing sheets. When efforts and hopes were all over, suddenly a piece of timber to which the sheets were tied, came to the surface of the water and then we were able to retrieve 97 of them. It was the 24thof May.

Having the Madonna so tenderly close to us, it was but natural to show our thanks to her with something visible. We therefore built a chapel in Araimiri, both to serve the school children as well as the people of the village.  When a new mission station was opened in Lariau, a chapel was dedicated to Mary. The devotion to Mary Help of Christians became a sign of the Salesian presence.  Don Bosco reminds us, ’Spread the devotion to Mary Help of Christians and you will see miracles.’

Port Moresby, the Capital city of the country, could become the beacon and have the Help of Christians, as a visible presence.  For Her, we therefore needed a beautiful house where people could believe in her message: “This is my house.  From here my glory will go forth.” ‘No budget, no money’ as always, was the opposition from different corners. It was also from within. These were the challenges we had to face. But the church was built and declared as an Archdiocesan Shrine in honour of Mary Help of Christians.

During the consecration and dedication of the church, the former Governor General, Sir Paulias Matane, who is not a Catholic, said: “This is the most beautiful church in Papua New Guinea and perhaps in the whole of Oceania.” The best remark, however, that came to my ears was from one of our church members: “In this church, I feel that I have the atmosphere to reflect and pray.”

For the occasion of the consecration and dedication of the shrine Thomas Cardinal Wilson wrote a beautiful prayer to Mary Help of Christians. It has been retouched to suit our Salesian tradition.

People everywhere and of all times

have always called upon you

in all their needs

and you never failed them.

we come to you in prayer.

Look upon those who need your help:

the sick, the dying, the lonely,

those who have faith and hope,

Touch the lives of our young people

that they may hear the call of your Son

to go and work in His vineyard.

Bless and protect our Church,

the faithful and their shepherds;

Our countrymen and those

who were chosen to be leaders;

that one day we may be

with your Son Jesus and

with you in heaven.

you are our mother, hear our prayer.

I am now a man advanced in age, fighting every day against the collateral damages left by the Hansen disease. My great hope is that when the end will come, somebody will be there to bless the door where the Virgin Mary is. It all started with her. May it all end and restart with her once again.