Papua New Guinea – Manus refugees and asylum seekers: that it not remain discussions and statements
Featured 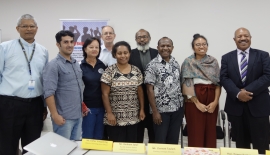 (ANS – Port Moresby) – Pope Francis has invited priests and consecrated to "smell the sheep." In preparation for the Salesian General Chapter 28 (GC28), Salesians are called to reach out to those who are waiting for us - the 'cast offs', child migrants, refugees, street boys and girls, people whose human rights and dignity are violated everyday, those caught up in networks of slavery and the loss of their freedom. Papua New Guinea has several of these.

The present situation of the “Manus Refugees” has been hidden from view for the past six years leading to social and moral problems and a number of human rights abuses. This complacency should not continue. Communicating the issue through different media should bring about an effective social change.

"What is happening to refugees and asylum seekers? What will happen to the local population of the island of Manus, what will be the socio-economic situation, will there be a negative effect on Papua New Guinea when the Manus detention center is definitively closed?" These are just some of the questions that will emerge on the social issues in the country, of which the Catholic Church is concerned, and what the Episcopal Conference of Papua New Guinea and the Solomon Islands addressed at a round table it organized at Waigani, together with the "Catholic Professionals Society" (CPS), on the issue of refugees.

"About 495 refugees and 131 asylum seekers, for a total of 626 people, are awaiting decisions and resettlement," said Paul Harricknen, human rights lawyer and President of CPS. "There have already been 6 deaths among asylum seekers. Only 146 have been rehabilitated and resettled in the United States. Thirty-seven were the births registered among the refugees in Manus."

Kurdish refugee, Benham Satah, living in PNG for 5 years as a refugee on Manus island and currently in Port Moresby for the last seven months, spoke on the health problems and medical care the refugees needed. “We had several people who lost their minds and no control on their life. Seven have died. All their deaths where preventable by proper mental and physical health which haven’t been provided in the past 5 years,” he said.

Australia has a moral obligation to look after ALL refugees and Asylum Seekers.

Papua New Guineans, including Manusians have said we no longer support the 'chequebook diplomacy'.

We are deeply concerned that the human rights of the refugees and asylum seekers have been breached as they were forcibly sent to PNG; and Australia's policies has caused us reputational damage.

We, the participants are speaking on behalf of the women and children on Manus who are the victims of Australia's policies.

The men have suffered enough from prolonged detention. Enough is enough. The time has come to let them go.

The core team of the “Manus Refugees Panel” – Rebecca Lim, Migration, Human Rights and community engagement practitioner; Paul Harricknen, President of the Catholic Professional Society and Lawyer; and the Salesian Father Ambrose Pereira, CBC Social Communication and Youth Secretary – met with the Governor of NCD, Hon. Powes Parkop on 3rd November to discuss ways ahead to ensure that the statement is carried forward. Issues discussed surrounded the health of the refugees, abuse and information to the refugees. Meetings are planned with the relevant government ministries.

Bernard Unaballi, Bishop of Bougainville, has suggested that there needs to be a commission at the level of the Catholic Bishops Conference to ensure that the different statements are followed up, carried forward and not stay at the level of discussions and statements.

In the meanwhile, several refugees are being forcefully transported to Manus amidst a large number of visible police and immigration personnel. This is done in full view of the local people. The transportation is done under the paranoia of security concerns for Asia-Pacific Economic Cooperation (APEC).