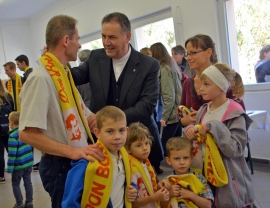 (ANS - Budapest) - Exactly one month ago, on 4 November, the Animation Visit of Fr Ángel Fernández Artime, Rector Major, to the smallest Province of the Congregation, that of Hungary (UNG), came to its conclusion. Among the Hungarian Salesians those days remain etched in their memory.

From the UNG Office of Social Communication

Fr Á.F. Artime arrived in Hungary on November 1st, a Thursday afternoon. If his task was to encourage and animate Salesians, members of the Salesian Family, educators and young people, fortifying their spirit of union and family among us all, then I think we can say with certainty that he was able to do so just as Don Bosco would have, and in just four days!

In Kazincbarcika, the Rector Major reminded educators of a truth that is sometimes forgotten: the importance of creating educational environments with and for young people. In fact, after the performance of the choir of the institute, he said: "these students may one day forget the concepts the professors passed on to them, but having sung together in this choir will remain imprinted in their memory forever."

When in Budapest he addressed the teachers of Catholic schools gathered for a congress on pedagogy - and one third of them was not a teacher of Salesian schools - he offered a perfect synthesis of the pillars of the Preventive System. "You are not friends for the young; you are their educators; but in this asymmetrical relationship, according to the Salesian style, personal affection for the students cannot be lacking. Teach them the subjects of study, but do so with reason, religion and loving kindness."

He also emphasized the importance of faith education to open the soul of the young to the transcendent. And he spoke of loving kindness as knowing how to transmit the feeling or message "that the life of our students interests us."

His words must have been truly effective, if a teacher then shared on the web: "Saturday 3 November I met Don Bosco ... He enraptured us with his personality that depicted Don Bosco for us, transmitting in a credible manner the Salesian educational style."

To the Salesian Cooperators he did not propose unattainable models, but spoke about the role of the oratory and the beauty of the identity of those who consecrate themselves to the good of the young, just as did the Hungarian blessed Stefan Sándor.

We had long awaited this visit for a long time ... His words and gestures will be carefully preserved, and his voice will long resound in our ears. He has indicated us a road to embark upon and accompanied it with his example.