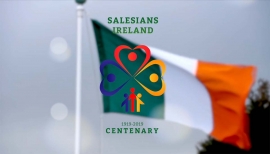 (ANS – Dublin) – The Salesians came to Ireland in 1919 on the invitation of Dr Denis Hallinan, the Bishop of Limerick. On the feast day of the Immaculate Conception, 8th December 1919, four Salesians, led by Fr Sutherland, arrived in Copsewood House, Pallaskenry, Co. Limerick. They opened an Agricultural College, the first foundation of the Salesians in Ireland. On 8 December 2018 they celebrated the opening Mass of this Year of its Centenary Celebration in the Shrine of Our Lady Help of Christians in the Salesian House in Pallaskenry, Co. Limerick.

The history of Irish Salesians goes back much further than the history of the Salesians in Ireland, or the history of the province. Don Bosco was friendly with Monsignor Tobias Kirby, Rector of the Pontifical Irish College in Rome (BM XVII, 60) in the 1880s and, as a result, some Irish students on their way to that College stopped in Turin. Some of these stayed for a short while and then continued their journey to Rome. Five of them stayed with Don Bosco and became Salesians.

There were many other Irish Salesians, mainly in England, before the Salesians eventually came to Ireland in 1919. Bishop Denis Hallinan of Limerick had known Don Bosco when he (Hallinan) was a student at the Pontifical Irish College in Rome (MB X, 1372), and it was he who invited the Salesians to open a college at Pallaskenry in the diocese of Limerick.

This mother house of the Salesians in Ireland started as a commercial college but within a very short time the Salesians there decided that the real need in rural Ireland at the time was for an Agricultural College. Thus began a long history of Salesian involvement in agricultural education in Ireland, an involvement that still continues in Pallaskenry.

Subsequently, a second agricultural institute was opened a few years later, in 1922, in Warrenstown, which for a certain period also hosted a novitiate. The third Salesian house was in Ballinakill, which became necessary with the outbreak of World War II to prevent the Irish Salesians who wanted to complete their formation from reaching Great Britain and thus enlisting.

Then came the center of Crumlin, in Dublin, in 1953, where the Salesians over the years have done great pastoral work, and which today houses the Provincial House; and then again other centers: in Maynooth (1973), in Celbridge and in Milford-Limerick (1981), the "Rinaldi Community" in Dublin (1991), without forgetting the various "Don Bosco Houses" which from 1977 to today have spread throughout the Irish capital, representing good practice recognized by all in the field of reception and service to young people and young people in need of residential care.

Today, Ireland hosts 52 Spiritual Sons of Don Bosco in five communities, many of whom are involved in various ministries outside Salesian houses. In fact, despite the decrease in numbers, the religious are more active than before as to pastoral initiatives. Clearly, however, the current challenge of the Salesians in the country is to transmit the Salesian charism and the educational method to lay collaborators, so they can continue managing the houses and presences and keep alive the gift of Don Bosco to the land of Saint Patrick.