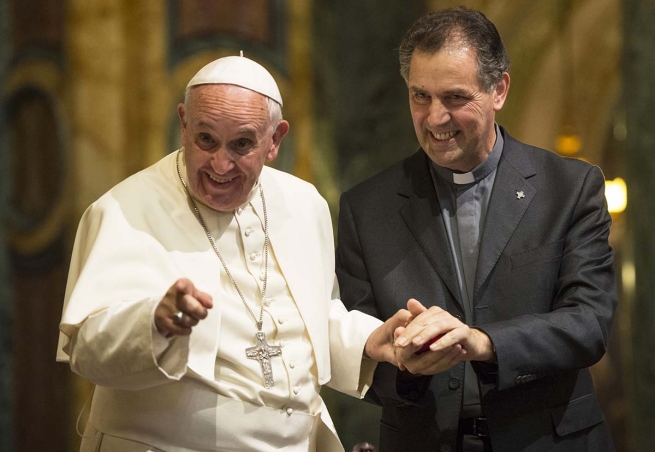 (ANS - Vatican City) - On the occasion of the opening of the Salesian Family Spirituality Days, we publish the preface by the Holy Father to the volume edited by Antonio Carriero, SDB, "Evangelii gaudium con don Bosco", a text in which the Salesian Family takes up the message of the Apostolic Exhortation of Pope Francis from a pastoral educational point of view.

You Salesians are lucky because your founder, Don Bosco, was not a saint with the face of "Good Friday", sad, long-faced, morose ... But rather from "Easter Sunday". He was always joyful, welcoming, despite the thousand labors and difficulties that besieged him every day. As they write in the Biographical Memoirs, "his radiant face of joy manifested, as always, his own happiness in finding himself among his children" (Biographical Memoirs of Don Giovanni Bosco, volume XII, 41). It is no coincidence that for him holiness consisted in being "very happy, joyful". We can therefore call him a "healthy bearer" of that "joy of the Gospel" which he proposed to his first great student, Saint Domenico Savio, and to all of you Salesians, as an authentic and ever-present style of the "high measure of Christian life" (John Paul II, Novo Millennio Ineunte, 31).

His was a revolutionary message in a time when priests lived the life of the people with detachment. The "high measure of Christian life" Don Bosco put into practice by entering the "social and existential periphery" that grew in the 19th century Turin, capital of Italy and industrial city, which attracted hundreds of young people looking for work. In fact, the "priest of the poor and abandoned young people", following the farsighted advice of his teacher St. Joseph Cafasso, went down into the streets, entered the building sites, factories and prisons, and there he found children who were alone and abandoned at the mercy of the owners of work, without any scruples. He brought the joy and care of the true educator to all the boys he tore from the streets, boys who found in Valdocco an oasis of serenity and the place where they learned to be "good Christians and honest citizens". It is the same atmosphere of joy and family that I too was lucky enough to live and taste as a child, attending the sixth grade at the Colegio Wilfrid Barón de los Santos Ángeles, in Ramos Mejía. Salesians have formed me to beauty, to work and in being very joyful and this is your charisma.

They helped me grow without fear, without obsessions. They helped me to move forward in joy and in prayer. As I had the opportunity to remind you during the visit to the Basilica of Mary Help of Christians on 21 June 2015, I return to recommend the three white loves of Don Bosco: Our Lady, the Eucharist and the Pope. Today we speak little of Our Lady with the same love with which your Saint spoke of her. He entrusted himself to God by praying to Our Lady and that trust in Mary gave him the courage to face the challenges and dangers of life and its mission. As a second love of Don Bosco, the Eucharist must remind you to start children in the practice of liturgy, lived well, to help them enter into the Eucharistic mystery and, lest we forget, the Adoration. Finally, love for the Pope: it is not only love for his person, but for Peter as head of the Church and as a representative of Christ and spouse of the Church. Behind that white love for the Pope, there is love for the Church. The question you must ask yourself is: "What is a Salesian of Don Bosco to be for today's young people?". I would say: a concrete man, like your founder, who as a young priest preferred, to the career as preceptor in the families of nobles, service to and among the poor and abandoned children. A Salesian who knows how to look around, sees critical situations and problems, confronts them, analyzes them and makes courageous decisions. He is called upon to encounter all the banlieues and inner-cities of the world and of history, the peripheries of work and of the family, of culture and economy, which need to be healed.

And if he welcomes, with the spirit of the Risen Lord, the peripheries inhabited by children and their families, then the kingdom of God begins to be present and another story becomes possible. The Salesian is an educator who embraces the fragility of young people who live in marginalization and without a future, bends over their wounds and cures them like a good Samaritan. The Salesian is also optimistic by nature, knows how to look at young people with positive realism. As Don Bosco teaches still today, the Salesian recognizes in each of them, even the most rebellious and out of control, "that point of access to the good" on which to work with patience and trust. Finally, the Salesian is the bearer of joy, the one born of the news that Jesus Christ has risen and is inclusive of every human condition. In fact, God does not exclude anyone. To love us, He does not ask us to be good. And neither does He ask us for permission to love us. He loves us and forgives us. And if we allow ourselves to be surprised by the simplicity of those who have nothing to lose, we will feel our heart flooded with joy. When these characteristics are missing, here are those long faces, sad faces.

No! To the young you must bring this beautiful news, true news versus all the news that pass every day in the newspapers and on the net. Christ has truly risen, and to prove it were Don Bosco and Mother Mazzarello, all the saints and blessed of the Salesian Family, as well as all the members who daily transfigure the life of those who meet them because they were the first to let themselves be reached by the mercy of God. The Salesian becomes a witness to the Gospel, the Good News which in its simplicity must deal with the complex culture of each country.

Putting together simplicity and complexity, for a son of Don Bosco, is a daily mission.