RMG – ANSFoto: a window on the Salesian world
Featured 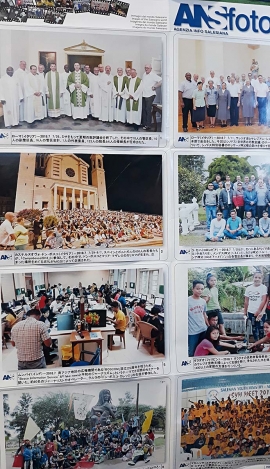 (ANS – Rome) – The “Agenzia iNfo Salesiana” (ANS), the communications agency of the Salesian Congregation, has carried out practically all its activity online over the years: the site is the platform for access to the world of Salesian information, and its profiles on social networks – Facebook, Twitter, Instagram, Flickr and YouTube – as well as disseminating the Congregation’s messages, encourage digital communication of and in the Salesian “galaxy”. But there is still one “analogue” product remaining and that has not lost its edge with the passing of time: ANSFoto.

Now going back many decades, ANSFoto today is the only paper item produced by ANS. It is substantially a monthly poster of photos offering the 8 photos considered to be the most significant that month in the life of the Congregation, the Salesian Family and the Church: these range from institutional events to more symbolic ones, from the agenda of members of the General Council to those in which the true players are those who  benefit from Salesian work, young people at risk.

During their Extraordinary Visitations around the world, very often General Councillors or Regionals find ANSFoto on the walls of community rooms, or in oratories or youth centres, or along school corridors and in parishes … One could call it a best practice, because it promotes awareness of Salesian matters in all countries and this way encourages a sense of belonging and of family.

The poster is printed with captions available in the six most spoken languages of the Congregation (English, Spanish, Italian, Portuguese, French and Polish); but there are also people who, with admirable dedication, add a translation monthly to the originals so that everyone can benefit from them. This is the case, for example, in the Salesian community at Hyuga Gakuin, Myiazaki, in Japan.

In recent weeks the ANS editorial team has sent out letters and emails asking subscribers to renew their subscriptions and inform of any likely changes of address. The database is being updated this January.

With its 8 photos a month in its regular mailings, and with special editions for more important events (Bicentenary of Don Bosco’s birth, World Youth Days …) and with the poster on the Rector Major’s Strenna attached to it, ANSFoto continues to be a significant window on the Salesian world.

And of course there is also a digital version.