Philippines – Young People of Mindanao are waiting for the Salesians
Featured 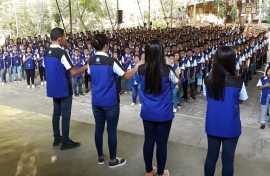 (ANS – Davao) – As the second largest island of the Philippines, Mindanao main island with adjacent islands makes up 97.530 km2 with 25 million people. It is a multi-religion and multi-cultural population, with a majority of Catholic Christians, and minorities of Muslim and Animist religions. The evangelisation of Mindanao goes back to the 16th century and in the whole country the vibrant lay-driven Catholic communities are well known for their well animated Basic Ecclesial Communities and numerous priestly and religious vocations.

The poverty of Mindanao is striking - probably even 40% of Mindanao children suffer hunger and are malnourished (Save the Children, Philippines info) like in Sub-Saharan Africa. Catholic education (Philippines with 84.5% public schools and only 11% of Catholic schools) is not among the best in this zone. In the Year of the Youth (Filipino Catholic Bishops Conference declared this for 2019) the number of poor young people of Mindanao calls the Salesian attention.

Salesians of Don Bosco have been in Mindanao only since 1991 with three presences: Don Bosco Mati (Davao Oriental) with one parish, TVET and High School; Don Bosco Dacudao (Davao-Calinan) with one parish of Mary Help of Christians; and Don Bosco Buda (Bukidnon province with one TVET and social work among the indigenous youth). Recently a Boys Home (Davao) was closed and there is a pending invitation to Cagayan de Oro (main transport hub of Mindanao) is being discerned.

Sacred Heart parish (Mati) and Mary Help of Christians (Davao-Calinan) counts about 3000 or 2500 families respectively and it means about 300 lay mission partners involved in stewardship - various ministries in the large parish community with dozens of 'stations' or 'basic ecclesial communities' (BEC). The BEC members are full of joy in serving their community:

Helping people in need, especially the marginalized, also with alternative medicine Serving the Lord in liturgy and His people Being members of Don Bosco parish - sense of belonging Bringing the youth together for events and youth movement formation.

The Mati parish was entrusted to the Salesians 21 years ago, in 1998, and over the years has established a true Salesian spirit, also thanks to the group of Salesian Cooperators, synergy with the Vocational Training Center (1993) and Senior High school (2015). Majority of the population is economically rather weak, so another project of Parish Cooperative for marginalized people was launched this month.

The Salesian Family at Mati is slowly growing, with a quite active Don Bosco Alumni (GEX is being established following the 2018 animation visit from World Councillors, Mr Angel Gudina and Mr Alberto Piedadet to FIS province. Five Salesian Cooperators with the promise are now re-starting with the 15 plus new group of Aspirants (Delegate Fr Jude Albarando - Rector of Don Bosco Mati). The synergy between parish with hundreds of committed lay people and the Vocation Training center makes the whole work very dynamic. Indeed many of the VTC students are our parishioners.

Buda Don Bosco is the frontier of the Salesian mission in this island: probably the most humble Salesian structure in the whole of the Philippines, located in the Bukidnon highland (900 m above sea level) among the Lumads, original Mindanao indigenous people. The Buda Don Bosco Agri-preneural training center and social work for the rural indigenous people in Bukidnon has slowly developed since 2004 and at present there are two resident Salesians - the founder, Fr Uras (Italian missionary) and young Mindanao Salesian Fr Ariel. Together with 15 lay mission partners and daily educating our 14 boarding high school students this youth empowering humble and prophetic mission is developing.

The vocation-rich Mindanao Catholic community has already offered 8 professed Salesians (6 priests, one practical trainee and one postnovice) and two novices.

Mindanao mission might be a true prophetic call for many Salesians to leave their comfort zone and embrace a new frontier in their own country, witnessing to Don Bosco's heart among the poorest of the poor young people. NEW FRONTIERS are in each of our countries where youth poverty touches the Salesian hearts and calls them to reach out!