RMG - Missionaries: people who get tired only if they rest
Featured 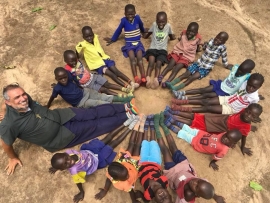 (ANS - Rome) - Don Bosco is considered a missionary saint without ever having been on a mission. It was his great aspiration and he received many offers of destinations to which the first Salesians were sent, but it was only when he saw it clearly in his dream that he succeeded in achieving this goal in life, through the first missionary expeditions. From that moment on, the missionary spirit of the Salesians goes hand in hand with their charism: an evangelizing passion through education and integral promotion of young people, especially the most disadvantaged.

by Alberto López, of the Salesian Mission Office of Madrid

Nearly 15,000 Salesians scattered in 1936 presences from 134 countries on the five continents attest to what the word missionary means today, making theirs the words of Don Bosco: "my life for them, the young." Being a missionary includes qualities that stand out to the naked eye: the joy on one's face, the optimism to be transmitted, the hope one breathes, the always young vitality and the blind trust in Divine Providence.

Even the UN peace missions report that "in the last corner of the most inhospitable place there is always a missionary who has remained with the population."

In general, they are admired by the population and respected by the authorities, even though they are sometimes feared, because they defend the rights of the most vulnerable. Many times their lives are at risk and they are threatened, but they are not afraid of death.

The Rector Major of the Salesians, Fr Ángel Fernández Artime, acknowledges that Salesian missionaries "are not heroes; they are people fascinated by Jesus, in love with Don Bosco, who also give their lives to young people and who want to consume their lives by donating themselves to them."

Being present in many countries, they stand alongside populations in war, in the midst of epidemics, droughts and famines, coordinate emergency activities during natural disasters, distribute food, provide health care and shelter, help build wells, bring light and sanitation to the less-served suburbs of the cities ... and all this in the name of Don Bosco.

The Salesian missionaries have decided to remain in the midst of the war in Central Africa, in the Congo, Sierra Leone and Syria; they have worked with former boy-soldiers in armed conflicts in America and Asia; they took care of the Ebola orphans in Sierra Leone and Liberia; they go out every day in the streets to save the lives of so many young people ... and all this, in a disinterested, generous and helpful way.